"Move Over, Met Police, We're The Wokest Farce In The Country!" 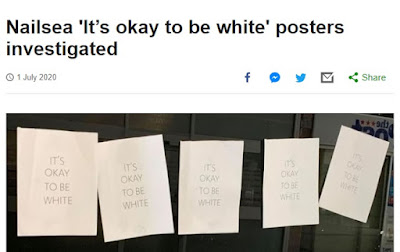 No. Avon and Somerset Police, of course!


Avon and Somerset Police said it believed the posters were put up overnight on Saturday.

"It is inexplicable and unacceptable," he said. "We are a vibrant, multi-cultural and diverse community. There is no space for hate in Avon and Somerset."

Really? That's surprising to hear, there was a place for it back in 2008. Aqil Farooq has probably made superintendent by now...

Queries to the farce as to what, exactly, makes 'It's OK to be white' some sort of hate crime have gone unanswered. Of course. Because we all know 'It's ok to be black' or 'It's OK to be brown' would never be described as such.
Posted by JuliaM at 10:30

Email ThisBlogThis!Share to TwitterShare to FacebookShare to Pinterest
Labels: ffs!, long march through the institutions, modern policing, professional offence-takers, that can fuck off

The motivation is strong and there's an awful lot of competition for the Wokest title.

Here in west Yorkshire, the farce entry 'Social distancing for Looters' has been welcomed by Kirklees, the council that failed miserably in two decades of fiscal bids to devastate the High Street.

Up in Glesgie signs saying Whyte's Life Matters would have been appropriate after the recent multiple slashings.
And nothing to do with micturation.

Maybe it would be a good idea to disband all the police farces and start again as Robert Peel did with the main reason for the police being to prevent crime. What is the point of the police turning up after the event unless they can give first aid if necessary.

I could go on about the present stupidity of bowing to the idiots that they should be cracking down on but doing so will upset the snowflakes.

I just don't know what to do now! It's not OK to be white and it's racist to black up. Where do I go from here?

How in God's name does "It's OK to be white" constitute a "hate crime"?

How is it anti non-white?

Does driving a white car make you a racist?

Does driving a black car make you a foaming-at-the-mouth marxist revolutionary?

Does this appalling apology for a copper even understand the English language?

Is there no way this moron can be forcibly retired on the grounds of terminal idiocy?

People are idiots. I've just discovered a website called 'Not always right' where people who work in the retail and service industries relate stories about obnoxious and thick as mince customers. It is really addictive but it is gradually destroying my faith in human nature. What little bit was left of it.

'Approved' opinions are the only ones to hold in public. Anything else can only be whispered in trusted company.

Thanks must give that a try. I just stood behind a Masked Woman in Tesco, must have been her first foray into post covidland, someone had to explain applepay facial recognition don't work with a mask on
Lolz

Is it true that MTG hates the Police because they didn't investigate the theft of his mower from his shed because his shed wasn't painted black? Racist bastard!!

Hate? I never allow myself to fall into such a raw and self-defeating emotional state, my dears.

Pointing out force farce is nothing less than the civic duty of all good citizens...and I do my share. If that touches a nerve I must be conducting myself well.

"...the council that failed miserably in two decades of fiscal bids to devastate the High Street."

What they didn't manage, lockdown inevitably will.

"Maybe it would be a good idea to disband all the police farces and start again..."

I really can't see that anyone could turn them around now. Mind you, it'd be nice if someone at least tried...

"Is there no way this moron can be forcibly retired on the grounds of terminal idiocy?"

Well, presumably not, or our 'conservative' government would get right to it, surely?

" It is really addictive but it is gradually destroying my faith in human nature."

Eeeeeww, I can see why! What the hell is wrong with people?

"...someone had to explain applepay facial recognition don't work with a mask on..."