But ‘Everyone’ Didn't Fail Him…You Did, Chief Con Gargan!

Nick Gargan, chief constable of Avon and Somerset Police, admitted the city had “failed” to protect Mr Ebrahimi, who was beaten and set alight in July.


Mr Gargan echoed many local voices when he said he found it “hard to understand how such an event can happen in such a tolerant city” .

Well, clearly, because ‘a city’ isn't tolerant. A city is made up of people, and some of them are tolerant and some are not, and the latter are why we employ – at great expense – a system of uniformed guardians to keep the peace.


Mr Ebrahimi rarely left his council house on Capgrave Crescent in the Brislington suburb of the city.

“He was terribly misunderstood by the community and something should have been done to put this right,” Mr Gargan said.

“Who can say why he was being picked on? He was different, disabled and Iranian.”

‘Who can say’..? Why, I can say, Gargan. He was picked on because there were absolutely no consequences for doing so, and that’s your failing.

Oh, sure, some of it is down to the courts and what they laughably consider punishment these days, but it’s hard to say that they wouldn't have stepped up to the plate this time because no-one from your command did anything other than arrest him.

Yes, him. The victim! Not the howling mob!


The block in which Mr Ebrahimi lived is made up of around 100 maisonettes and flats facing towards a central courtyard.

Unable to work, he spent his days tending to his flowers and looking after his cat. But there were no flower pots outside Mr Ebrahimi’s empty home and the few neighbours who agreed to talk to The Independent spoke of their sense of shock and disgust.

One local resident, who wished not to be named, said: “It was disgusting. The whole community is in shock, we just want the whole thing to go away.”

Yes, I expect you do. But it shouldn't. At the very least, you know the identities of the others in that mob, and you’d sleep easier at night if you publicised them. To Facebook and Twitter.

Don’t waste time with Gargan, or the other backpedalling authorities desperate to avoid the blame or to insist that they aren't the only ones to blame. These vigilantes want to live by the sword, time they had a taste of the flip side of that...


The crime would have been visible to the whole courtyard but another resident, who admitted “emotions were high”, thought that threats of violence were “all talk” after the Iranian’s arrest and said few residents saw anything.


Speaking to BBC Radio Bristol, Mr Gargan said: “When all the dust has settled down on this case we need to sit back as a community and reflect on what went wrong and why wasn't that poor man better served.”

Here, have a mirror. Take a look. 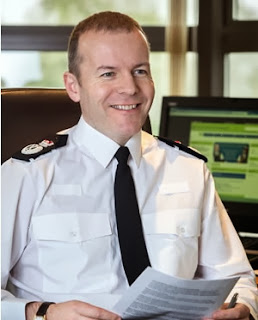 More frightening than anything else you'll see this Hallowe'en...

That’s why. He wasn't ‘better served’ because you aren't fit for the position you hold, you weasel-faced excuse for a police man..


This call was echoed by the city’s Mayor George Ferguson, who told the Bristol Post he was “proud of Bristol” as a “tolerant place to live” but that “it is vitally important for everyone involved to sit down and look at what could have been done differently”.


In a statement released via solicitors, Mr Ebrahimi’s family said that he had been the victim of hate crimes for several years and it hoped all those who “failed” him would face justice.

So do I. And I know who should be at the top of that list. It’s the man whose resume reads like a bad joke about 'shiny arse graduate entrants who've never done a day's coppering in their lives' :


”Nick began his career in 1988 as a police constable with Leicestershire Constabulary under the Graduate Entry Scheme, after studying Politics and French at Leicester University.

Soon after joining, he attended the Accelerated Promotion Course.

In 1995 he was seconded to the National Criminal Intelligence Service, working at the London bureau of Interpol and then at the British Embassy in Paris where he was heavily involved in the investigation into the deaths of Diana, Princess of Wales, Mr Dodi Al Fayed and Mr Henri Paul.

He gave evidence at the eventual inquest in London. Nick returned to Leicester in 1998 and rose through the ranks to become chief-superintendent.”

It’s about time his rise was brought to a halt. Or we might see this man’s features presiding over yet more of these cases, maybe as head of the Metropolitan Police next time.
Posted by JuliaM at 09:00

It is going to get worse with brainwashed, politically correct 'graduates' being allowed to enter the police force at higher ranks and not have the street education gained from being a normal PC,

Probably the best post you have ever penned Julia - congratulations.

I wonder how many witnesses would have been looking out of their windows at just the right moment should a police officer have happened to swipe one of the perpetrators round the ear.....

What F211 said - the shite that pours from these ACPO clones' mouths is almost unbelievable. the 'city', the 'community' - dear God STFU!

I wonder how many witnesses would have been looking out of their windows at just the right moment should a police officer have happened to swipe one of the perpetrators round the ear.....

YOUTUBE would have been flooded and Gargan would have found the officers GUILTY before any legal proceedings, if any, reached a conclusion - the PC Prick has previous.

Gosh. Your 'cut and paste' critics can eat their words now, Julia. A very memorable post by virtue of superbly crafted expressions.

Say what you mean Julia and stop beating about the bush.
Jaded

A list of synonyms does not answer the question.

From chief superintendent in Leicester to chief constable in Avon and Somerset? Unless I misunderstand these ranks, his rise has already been stopped and he's on the long downhill slope...

Sadly, I see no sign of the decline being reversed in my lifetime. If ever :/

"Probably the best post you have ever penned Julia - congratulations. "

High praise indeed, Anna! Many thanks.

This story got to me, even before this arse's feeble flounderings.

The whinging self-justification of the police Tweets yesterday trying to claim that this approach of arresting the victim 'for their own safety' was sanctioned made me, if anything, even madder!

Yes, I've heard this. And we haven't seen the last of him, either.

"Gosh. Your 'cut and paste' critics can eat their words now, Julia."

Oh, Gadget's back - on Twitter, at least, if not blogging! And he's not learned a thing...

"Say what you mean Julia and stop beating about the bush."

"A list of synonyms does not answer the question."

I think it does answer why the feral underclass saw him as someone to torment, MT...

"Unless I misunderstand these ranks, his rise has already been stopped and he's on the long downhill slope..."