You Can Put In All The Zebra Crossings You Like…

…but you can’t legislate for people who won’t use them:


The family of a "wonderful son" - killed when he was hit by car after stepping off a bus - have spoken of their loss and led calls for safety improvements on the road where he died.

It’s a very sad case, but, as a driver, I see this situation all the time. In fact, I know that, if I'm approaching a bus that’s stopped at a stop just a few yards from a zebra or pelican crossing, I need to watch for those who would rather dart out suddenly from the front or back of the bus because they cannot be bothered to walk a few yards to cross in safety.

And no, I'm not talking about children. These weren't children, either.


Robert's death reignited concerns about road safety among Coulsdon Road residents and sparked pledges from councillors to push for action.

Coun Terry Lenton, for East Coulsdon, said she had previously called for a zebra crossing at the spot, at the junction with Cearn Road, where Robert and 51-year-old Ms Maudsley where hit.

And what’s the point, when it wouldn't even be used by most people if they had to walk a few yards?


Alison Tucker, 43, who lives metres from the scene of the fatal crashes with her husband Lee and four children, said: "You have to walk right out into the road at that bus stop to see whether anything is coming. We need to do something. It is such a worry."

That’s rather odd, as is the claim that ‘more lighting’ is needed as, unless this is a very old Google image (indeed, 'Cearn Road' doesn't seem to exist, being 'Cearn Way' at the point it meets Coulsdsen Road), the road seems quite straight and well lit. 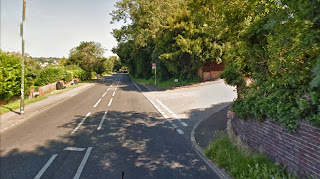 Naturally, the 'speed = automatic death' merchants have to butt in:

Yesterday - 14 October 2013 - Conservative Councillor Michael Neal was busy on Twitter wondering who would pay for traffic calming and 20mph zones. It's a bit rich for Councillor Terry Lenton to now say she wants a meeting with council officers to see what can be done after the latest avoidable death on our roads. She'd do better to lobby her fellow councillors to take road safety seriously, and tell them to stop thinking only about people who travel in armoured cars and instead consider the needs of pedestrians, motorcyclists and cyclists.

Perhaps those pedestrians could bear in mind the laws of physics and not dart out into the road? The fact that the police made no arrest in either case is telling, isn't it?
Posted by JuliaM at 10:40

Email ThisBlogThis!Share to TwitterShare to FacebookShare to Pinterest
Labels: health and safety, motoring

"You have to walk right out into the road at that bus stop to see whether anything is coming…….. “

Is akin to acknowledging "you have to walk right out into the road at that bend to see whether anything is coming.”

"We need to do something.” Like go to Specsavers, or learn the Highway Code, or wait patiently for the bus to depart.

Of course they have. Who else would call for taxpayers money to be spent on useless and expensive traffic calming measures after someone got themselves killed on the roads?

I think the Green X Code man or The Tufty Club** needs to return as kidz and their kidult parents seem clueless these days. Crossing roads just yards from mamrked crossings, crossing in front of buses and other large vehicles...iPodded up of course.

**Of course da modern version would be a baseball cap wearing (bill to the side) fuckwit - a VEM of course - speakin' in da patois accompanied by modern R'n' B shite so as to render the message incomprehensible.

Ah...Yes! The iPod of invincibility.

Not to mention for the chickens.

XX and instead consider the needs of pedestrians, motorcyclists and cyclists.XX

THAT must be a first!

Well fuck me side ways!

Indeed so, but sadly,. there's a lot more than can be controlled in this manner.

"...or wait patiently for the bus to depart."

Nothing makes me more wary than those white cords visible above a pedestrian's collar!