What On Earth Made Them Think This Would Be OK?

Three police officers are being investigated for allegedly joining a protest outside the Sultan of Brunei’s west London residence, as businesses cut ties with his country after gay sex was made an offence punishable by death by stoning.

Scotland Yard launched an investigation after footage of the peaceful demonstration, organised by the Labour councillor Lewis Cox, showed officers smiling for the camera while holding LGBT flags.

What were they thinking? I mean, they surely know they should remain apolitical beca... 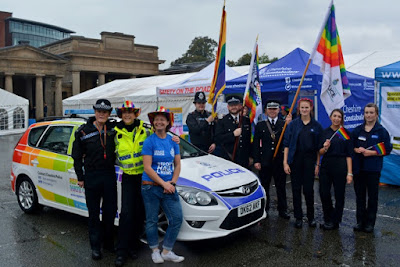 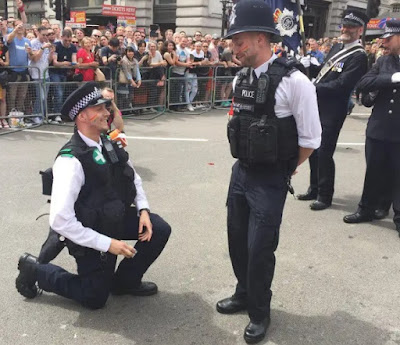 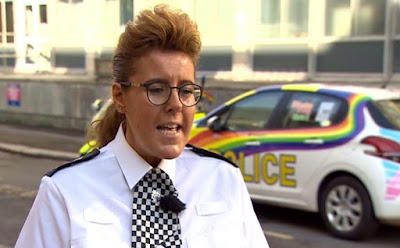 Email ThisBlogThis!Share to TwitterShare to FacebookShare to Pinterest
Labels: hoist by their own petard, identity politics, modern policing, sauce for the goose

They should be able to protest in their free time. Not while on duty though.

To add, gay sex should not be punishable by death. The officers should have booked the day off to attend the protest. After all it was a good cause.

Changed my mind. The cause needs highlighting. Good on them.

This had caused a bit of a stir within our ranks. I love to see our senior officers doing back-flips regarding political correctness.
Jaded

Hope you are ok today. F.

Can't wait to them in Rainbow hot pants...the men, daaarling.

"I love to see our senior officers doing back-flips regarding political correctness."

It's not difficult to imagine you loafing around any plod station, Jaded. Hands in pockets and 'chillin' in the post clocking-on stupor and metabolic downshift; the comatose eyes programmed to defy total closure and jaw configured to chew in slow marathon mode.

A Police officer is an officer of the Crown and should be above politics, taking an active stance in politics, or putting their uniform and office into a situation which could be misconstrued. I am in favour of the return of the death penalty for certain offences (such a parking on double yellow ones or in a disabled bay while not being the holder of a blue badge) but would not have demonstrated for the return of this penalty, especially in uniform.
To make homosexual sex an offence leading to the death penalty is wrong, especially when Islamic law allows the buggering of male children as a cultural tradition (which shows the level of hypocrisy and effectiveness of the cult) and some form of lawful protest should be allowed to show the revulsion felt by normal people.
Instead of boycotting the hotels, wouldn't it have more of an effect if openly gay organisations tried to book Rainbow functions at these hotels? If the bookings were accepted, it would show the world the level of hypocrisy of the Brunei ruler. If the bookings were refused, it would leave the chain open to legal action. If Tatchell and his cronies can bankrupt a couple of bakers, I am sure he could take on the Brunei government. Just think of the shedload of money he could get from one of the world's richest men?
Meanwhile, Police officers should not openly protest, especially when on duty and in uniform.
SoT, I understand at least one British soldier who was due to be posted to Brunei has asked for that posting to he cancelled.
Penseivat

A thought for Pensivat which, in the circumstances, I found surprising:
Peter Tatchell has come out in favour of Ashers Bakery!
He said in the Guardian (1 February 2016):
"I also want to defend freedom of conscience, expression and religion."
He finishes by saying:
"Discrimination against people should be unlawful, but not against ideas."

Now who was censured for saying that Lesbians had big chins?

Was Cressida Strap-on there?

What's the Sultan's view about Lesbians?
(Perhaps, allegedly like Queen Victoria, he does not believe Lesbians can have sex.)

Step away from the keyboard Melvin. It's bed bath time.
Jaded

" The officers should have booked the day off to attend the protest. "

Hmm, not sure that would have gone down too well.

"I love to see our senior officers doing back-flips regarding political correctness."

And they are doing it again over fraternisation with the Extinction Rebellion hippies...

Such a quaint old-fashioned notion. Aren't we so much better off these days?

Cracking idea! Play 'em at their own game!

"What's the Sultan's view about Lesbians?"