Aren't You Supposed To Know What's 'A Police Matter'..?

Horrified shoppers spotted a pair of French bulldogs locked in a silver van in Basildon town centre on Wednesday as temperatures neared 30 degrees.

Barking was also heard from another van in a town centre car park, off Great Oaks and opposite Basildon Fire Station, at 11.30am on Wednesday.

Concerned residents called the police immediately but have claimed they were initially told it was not a police matter.

Strange. Charities keep telling us it is: 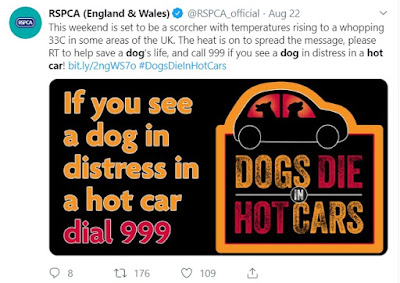 Other police forces keep telling us it is: 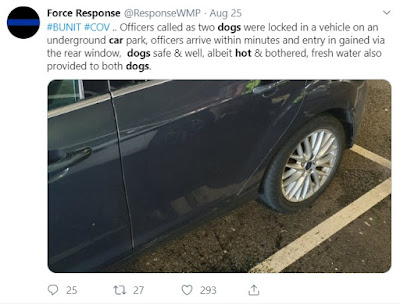 How did the situation 'worsen' exactly?


One witness, who asked not to be named, said: “I saw the dogs and told the car park attendant.

“We stayed with the dogs but after two calls to police they said it wasn’t a police matter.

“A paramedic came over and she also stayed with us and her and another lady rang the police.

“I think they realised they had to send somebody then.”

Ah. I see. It was when the idle bastards realised how it'd play in the media if the dogs died and a whole queue of people lined up to give their story...


Essex Police failed to provide a comment when contacted by the Echo.

I expect the PR manager was hiding in the toilet, sobbing...
Posted by JuliaM at 10:30

You may recall Jack Straw, former Justice Secretary, summing up police culture with his seasonally adjusted criticisms: "They prefer to sit around in a warm police station/they prefer to sit in their air conditioned offices...rather than going out on the streets to respond to police matters".

"Nip down to Thornton's and bring back two scoops of toffee fudge, Jaded. Make sure they are rock hard and don't waste any time talking to tax payers, dear."

Being Essex, can we be sure that the dogs were canines?

If you are quoting that idiot Jack Straw then you really are scraping the bottom of the barrel Melvin.
Jaded.

WC Jaded's mouth-and-finger reflexes are immediately triggered by plod critics and she leaps to accuse them of 'idiocy'. The highly intelligent, former Justice Minister is no exception to this debasing ever since the Straw announcement (which universally enraged plod through audacious plain truth) won the applause and respect of long-suffering victims of crime.

Your auto accusations of 'idiot' are pretty stupid, Jaded...even by your dumb standards. Jack Straw was one of the brightest students of Leeds University who became better known for his political career and immense contributions to UK business success. Several Universities have since paid tribute to a real and effective, public service. Try and follow his example, if you can.

Standing in the naughty corner, the police are the most outstanding example of overpaid, corrupt and lazy public employees. This Ambush Predator topic and my related comment are focused on Essex plod acting no different to the stereotyped public 'service'. On the other hand, your comment, Jaded, is typical in that it adds nothing to the discussion other than affording you a platform for hurling thoughtless abuse at any police critic, JuliaM included. If you had any wit at all, you would forsake a worn out strategy for one where you emerge from hiding behind false excuses of being overworked and therefore being unable to change.

Thanks for the advice Melvin. I'll change immediately.
Jaded

I am blessed with clever gadgetry to provide the illusion of Kingly living; waking on a sunny autumnal morning with hot tea, a Sainsbury croissant and to have immediate access to the best nuggets of yesterday's social media wisdom.

You know...educatid stuff from smart folk like wot you is, Jaded.

Walking round the nuthouse guiding by a nurse and a carer Melvin? Get them a croissant as well, don't be mean.

Vehicle in an UNDERGROUND car park. Not many sun's rays penetrating down there and probably a pleasantly cool temperature. Ridiculous reaction by all involved. Hope the owner can afford to seek compensation for the damage.

Proof even Labour stooges get something right occasionally...

"Being Essex, can we be sure that the dogs were canines?"

"If you are quoting that idiot Jack Straw then you really are scraping the bottom of the barrel Melvin."

Is he wrong, then? It wouldn't appear so in this case...

"Vehicle in an UNDERGROUND car park...Ridiculous reaction by all involved. Hope the owner can afford to seek compensation for the damage."

It still gets hot. The owner needs to be beaten with a horsewhip. Compensation is totally out of the question.