These 'Freak Accidents' Seem To Happen A Lot...

...and always to the same type of person. How queer!


Mrs Roy - who owns ELEVEN dogs - revealed that Mika has since been put down.

She said: "What needed to be done has been done and I can't do anything more.

"No amount of apology is going to bring that dog back.

"It's just a freak accident and there's nothing anyone can do about it, or will do about it, because it's nature."

For someone who claims to revere nature, she hasn't half spent a lot of money on not looking as nature intended... 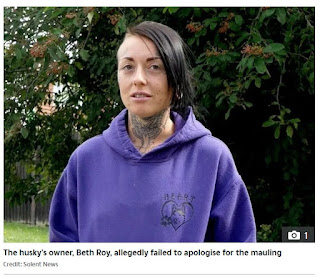 Eleven dogs and a fortune on tattoos - she must have a very well-paying job, eh?

What are the people charged with protecting the public against morons like these doing?


Hampshire Constabulary confirmed a ‘number of enquiries’ were made at the time of the attack involving Dior on August 3.

A Portsmouth City Council spokeswoman added: "There was a joint visit to [Ms Roy's] property by the police, kennels staff and RSPCA where all the dogs were assessed and checked for microchips and work to resolve the situation is ongoing."