Why Can’t Your Kid Use The One That Exists, Then?

The dad of a nine-year-old injured in a collision with a car in Ripple Road has urged the council and drivers to prioritise road safety.

Cue lots of shots of the little tyke looking sad in bandages in the local paper. Plus anguished father bewailing the awful state of affairs.


Dad Abu Mugenyi, 52, said he was at his Rosalind Court home when he was told by a friend of Ayub’s about the crash.

“He came running and said: ‘Your son has been knocked down by a car – I’ve just seen him lying on the floor’,” he said.

“I just ran to the scene and I nearly collapsed because I’m Type-1 diabetic.

“I’m really upset, I really feel bad and have constant headaches and worry.”

Is this a local newspaper interview, Abu, or one you’re preparing for the Benefit Office?


Abu said careless driving blights the area in and around Ripple Road, which has had four crashes since April and says speeding near Rippleside Cemetery is a problem independent from Ayub’s accident.

“People drive too fast in that bus lane,” he said. “People need to drive at 30mph but they don’t – they just fly.”

“There should be a speed camera round there and it could do with a zebra crossing for all the kids crossing from school.”

Could it really? Well, here’s the view of that junction: 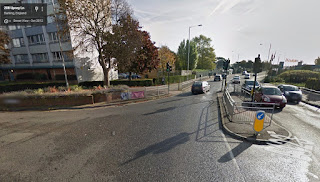 Gosh, what could that thing in the middle be? A pelican crossing?

So why not use it?

And what’s the official version, since I note no arrest was made at the scene?


A council spokesman said the view of the police and Barking and Dagenham’s road safety team was that the cause of the accident was Ayub entering the bus lane near Rippleside Cemetery.

Email ThisBlogThis!Share to TwitterShare to FacebookShare to Pinterest
Labels: Barking and Dagenham, blaming anyone but the victim, motoring, road safety

I'm sure there's an ambulance chasing lawyer out there that'll take up the challenge.

I have no doubt at all!