But The Likes Of The Guardian Will Tell Us It's All About 'Poverty'...

Even average properties here change hands for £800,000, while mansions on the outskirts of the village can go for £5 million.

The local supermarket is a branch of Booths, the so-called ‘Waitrose of the North’.

Drive through the village and you’ll see gated driveways filled with spotless super-cars.

Both suspects, who cannot be identified for legal reasons, hail from prosperous middle-class families, with parents who are highly successful businessmen.

Is there maybe some other clue to this sort of savagery, perhaps in the victim's ... 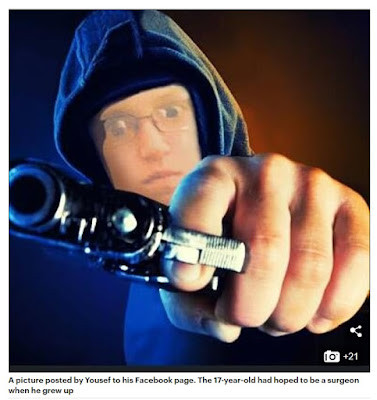 Always smartly dressed and impeccably polite, Yousef’s only obvious brush with teenage rebellion came via a passing interest in rap and grime music. In 2013, he posted an image on his Facebook page of himself pointing a handgun at the camera. The cartoonish image shows his face superimposed on a hooded figure from a professional stock picture.

BAME are involved in around 60-70% (or more) of street violence and robbery.

The black population of London in 2010 was just over 12%, yet black males were responsible for 54% of street crimes and 59% of gun crimes (Copping, Jasper. "Violent inner-city crime, the figures, and a question of race")

When I was working in London in the early-mid 1970s at a time when those lovable scamps from The Isle of Erin were creating all sorts of semtex mayhem, I was frequently stopped and checked out - both as a pedestrian and as a driver - by HM Plod. I'm sure that at the time, I was closer in appearance to the Sons of PIRA than your average dreadlocked West Indian, or Chinese grandma who were hardly ever checked by the anti-Provo plod.

Did we scream about racial profiling, or demographic harassment? Did we buggery! We were just rather glad to see some pro-active ploddery which gave us a greater chance of getting home and retaining our limbs.

This current street-gang/knife-crime/gun-crime pandemic cannot be addressed until what we laughingly refer as "The Authorities" cease their PC inclusivity obsession and actually take note of the elephant in the room and deal with it accordingly.

Before anyone hurls the epithet "racist" at me, let me add that I couldn't give a toss about the colour of someone's skin: in common with the vast majority of native Brits what I object to is not race, but culture. I object strongly to having an alien (often incomprehensible) culture foisted upon me and it being given a legal status and legal protection to a far higher degree than our own.

Our powers-that-be have failed us miserably; far more than the failings of Marshall Petain and Vidkun Quisling inter alia.

The story took a rather unusual twist, with the release on bail, for reasons us peasants can't know, of the accused...

"Did we scream about racial profiling, or demographic harassment? Did we buggery! We were just rather glad to see some pro-active ploddery which gave us a greater chance of getting home and retaining our limbs."

Spot on! One wonders why their families came here, if not to escape the corrupt, state-fearing culture of their homelands?