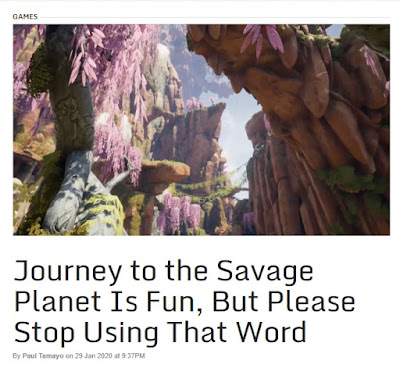 
It ain’t perfect, but it’s got heart. It’s a succinct and loving throwback to the Metroid Prime series that fills a pretty specific niche in a sea full of service games that want to become your part-time job. But I have to be honest, I hate seeing the word “savage” in a game about exploration.


My eyes rolled right the fuck out of my head when I read the title of this game at its reveal at the 2018 Game Awards. I know I sound like a wet blanket, but just… hear me out.

I have to admin, the tem 'wet blanket' wasn't the first to spring to mind. But this is a family blog...


The word savage has a long history being used to justify violent behaviour by colonisers.


I’m not asking for Journey to the Savage Planet to have some super poignant message at every turn, but according to Hutchinson, the game is meant to have a “tone of sort of early science-fiction of hopefulness.” But it’s worth asking whose hope it is we’re talking about.

The hope of gamers that this will be a game with few bugs and a sensible XP system?


I’m not going to die because of the title of this game or its story’s lack of conviction. Like I said, this ain’t new. I even thought the game was pretty fun! But that “emotional purchase” Hutchinson talks about hits a little differently when history paints some of us as savages – Columbus Day is still a national holiday.

That, I assume, guy had better not meet my brother in law who is a Savage, sparks might fly.

What is it with these people that see and take offence over nothing? Do they think it impresses everyone because it doesn't, it makes me shake my head in despair at how dumb people are becoming.

'I'm not going to die because of the title of this game.

Oh. Which title would have that effect, pray?

There are a lot of people described on this very blog who could rightfully be described as savages.

"What is it with these people that see and take offence over nothing?"

Maybe it's easier than doing the job he's employed for?

"Oh. Which title would have that effect, pray?"