Does 'Socialist Worker' Have A Point..?

It's OK, I've not been hacked, I'm just coming back to this story again. Or, more specifically, the furore over the article about it in 'Socialist Worker':


A left-wing newspaper mocked the death of an Eton schoolboy who was mauled on an Arctic expedition. The Socialist Worker claimed the incident was ‘another reason to save the polar bears’.

'Gosh, the 'Socialist Worker' is run by embittered morons, well I never..!' said absolutely nobody.

But it's entirely possible that class did indeed play some tiny part in this. Take the words of the BSES director:


Pearson told the inquest in Salisbury, Wiltshire: "This is not a fly-by-night organisation. We tasked a high-court judge to carry out an independent inquiry ... we are absolutely an open book."

In what way is the fatal overconfidence & disregard for rules and procedure shown in this sad tale not a hallmark of such an organisation, then?

And just how does hiring another ivory-tower idealist with the 'right' surname & school background help matters?


Pearson, formerly a commandant at the Royal Military Academy, at Sandhurst, said: "What we are putting in place is more training which may reflect better the situation they may find themselves in – getting people tired, getting their heart rate moving faster, providing distraction and getting them to fire the appropriate distance.

But it's going to be down to the individual and how they respond to stress. Some are better than others."

Once upon a time, we could count on a military man to have all those qualities already, or be washed out of Sandhurst.

Once upon a time, one could leave one's heir in the hands of any establishment figure in a wilderness and be confident he'd be home soon with a few tales to tell and no parts of his anatomy missing. Because the men in charge would have been experienced and competent.

They would have understood firearms, not read a manual or two and thought 'Job's a good 'un! Hope I never have to actually, you know, use the bally awful thing for real..'.

They developed survival skills, rather than comedy moustaches: 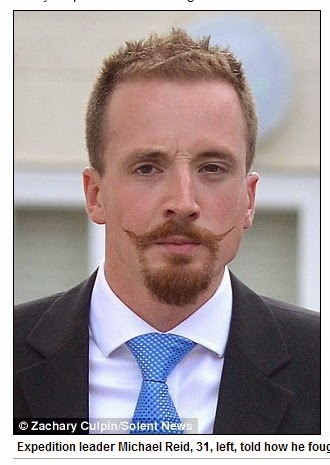 Class, it seems, is not what it once was. It's been treated to the dilution that marks so many of our once-great institutions. Something the likes of the writers of rags like the 'Socialist Worker' should be cheering on, surely?

We will have to wait for a conclusion, though. It seems the parents have hired a QC who plans to finish the job of eating the hapless team leaders alive that the polar bear started:


Mr Singleton decided to adjourn the hearing after listening to legal submissions, including from Lizanne Gumbel QC, representing the Chapple family.

Ms Gumbel, in submissions yesterday and this morning, told the coroner Horatio’s parents, GP Olivia and surgeon David Chapple wished him to consider the issue of “neglect” in his conclusion.

I think 'sheer hopeless overconfidence and criminal incompetence' would be a better consideration...
Posted by JuliaM at 10:50

Socialist Worker seems to have a selective appreciation about pithy comments on death. When Bob Cromagnon popped his clogs I wrote to the paper (at least, that's what they call it) suggesting that his funeral may take more than one day if the funeral director's staff stage a sudden, RMT style, 24 hour walk-out over pay, pensions, allowances, and 'heavy load' payments for having to heave the departed lard-arse about. The letter was rejected as it apparently breached the editorial guidelines and standards of good taste in referring to the departed. I was realty surprised as I didn't realise the rag had an editor, guidelines or, especially, standards.
Penseivat

Is that the same Socialist Workers' Party headed by Old Etonian Charlie Kimber, next in line for the family baronetcy?

Mr Reid has a passing resemblance to the devil himself. Would you, knowingly leave the 'fruits of your lions' in the devil's care? Depends on his baby sitting rates, I suppose. Tis so difficult to get reliable baby sitters these days, unless they are from Poland. Anyway, his hirsutism is reassuring and worthy of trust. I wonder how much he charges?

Just wait till John Prescott dies and we call out the Corporation dust-cart.

Surely "Socialist Worker" is an oxymoron...

I have recently been warned that all laser-cut beardiness is a Bad Sign and it turns out to be a very good rule.