I Guess It Is Indeed A News Story... 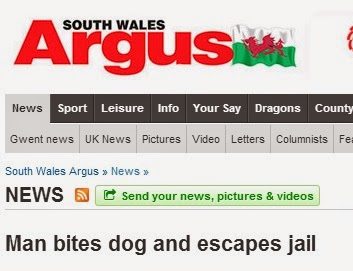 Timothy John Noonan, of Greenwood Avenue, Cwmbran had been found guilty to six charges against him and came before Newport magistrates for sentencing on Friday.

The 31-year-old was convicted of two counts of assault by beating against his then partner, two charges of causing suffering to an animal, namely his then partner’s dog, a threat to damage property and failure to surrender to police.


Defending, Steven Mock (Ed: !!!), said his client was “not a lost cause” and had always kept regular employment.

He said “He recognizes he has issues with alcohol and anger management.” Noonan was sentenced to 26 weeks imprisonment, to be suspended for two years.

That defence brief has a pretty appropriate name, it seems...
Posted by JuliaM at 09:05

Email ThisBlogThis!Share to TwitterShare to FacebookShare to Pinterest
Labels: domestic violence, justice system, people who ought to be hung up by their thumbs