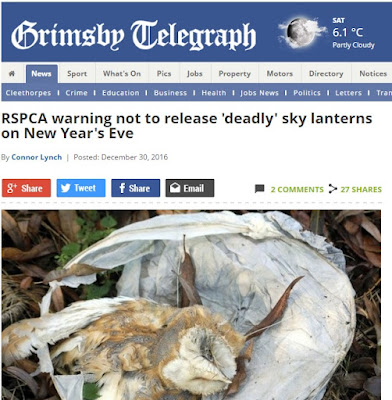 
Reigan Knight and Liam Phillips died after the car they were travelling in hit a BMW and then a wall at the junction of Southsea Avenue and Glendale Gardens, in Leigh, in the early hours of Tuesday morning.

Friends and family organised the ‘send-off’ event at Bell Wharf beach in Leigh on Thursday night, which saw about 300 people turn up to set off fireworks and lanterns.

Of course they did. What better way to commemorate two senseless, utterly avoidable, squalid deaths than the chance to maim or kill innocent bystanders..?
Posted by JuliaM at 10:30

Yet the RSPCA say nothing about all the that get killed by the bird mincers (wind turbines) not even when it is protected birds that are killed.

I wrote to no avail to the RSPB about bird-killing turbines. Nothing must perturb 'climate change’ and other politically correct myths.

"Yet the RSPCA say nothing about all the that get killed by the bird mincers (wind turbines)..."

Or the RSPB, as Greencoat points out...