The 'Indy's' response to this is, of course, to let them all out, giving publicity to the LimpDumbs:

The Liberal Democrats called for a 28-day limit to be imposed on the length of time people can be held in immigration detention centres.

Christine Jardine, the party’s home affairs spokesperson, said: “The Liberal Democrats believe detention centres should only ever be a last resort. It’s time the Tories listened, introduced a 28-day limit on detention, and shut the majority of the UK’s detention centres.” 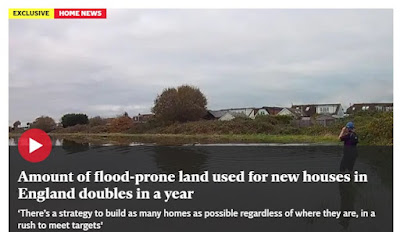 Tom Fyans, deputy chief executive of the Campaign to Protect Rural England, predicted “a state of prolonged anxiety every winter” for house buyers in those areas, blaming a lack of good planning, exaggerated by funding cuts for councils.

“There’s a strategy to build as many homes as possible, regardless of where they are and what type they are, in a rush to meet targets,” he told The Independent.

Gosh. I wonder why we need to build more and more housing every year? It's a puzzle,. isn't it?
Posted by JuliaM at 09:30

"I wonder why we need to build more and more housing every year?"

Well I, for one, agree on the 28 day limit. Long before that they should have been deported.

Why is how many are in detention over Christmas relevant to arguments about how long they stay in detention?

Gosh, it is problematic.

"Why is how many are in detention over Christmas relevant to arguments about how long they stay in detention?"

Because although the Left have no human weaknesses, like well-programmed bots, they know how to play on their opponents'....