The dog walker, 50, who lives near Ashridge, says she entered the wood – which is home to Fallow and Muntjac deer – just after 11am to find the two men with guns ‘covered in blood’.

After becoming concerned, she took some pictures of them, prompting one of them to come over and say he was going to film her.

She told Metro.co.uk: ‘This man had blood all over his hands, up his arms, on his clothing and all on his boots.

‘You have to think of the bigger picture here, a woman on her own walking a dog and he comes over saying he’s going to film me.’

Well, you were taking pictures of him, weren't you, love? So...why shouldn't he?


After the man told her he had been contracted by the National Trust to cull deer, the woman realised a dead deer was behind him.

As she called the Ashridge Estate to complain about the situation, the men allegedly began cutting up the animal in front of her, hacking off its leg.

Heh! How does she think her joint of meat ends up in Waitrose, all nicely wrapped in plastic? Does she think it grows like that?


She said: ‘They’d taken the stomach of the animal out while I was standing there.

‘I looked over his shoulder and the other one started to drag it off – a little black deer. It’s absolutely horrendous, the stuff of nightmares.

‘Ok, they’re culling deer but why are they out in one of the most popular dog-walking parts of Ashridge at lunchtime? It’s just not on.

‘I could have had a child with me. It’s horrendous that they’re allowed to do that.’

In listing this tale of woe, the photo editor's apprentice was obviously instructed to get a picture of a deer from the photobank. You know, for all those other readers who, like this hysteric, weren't aware of reality. 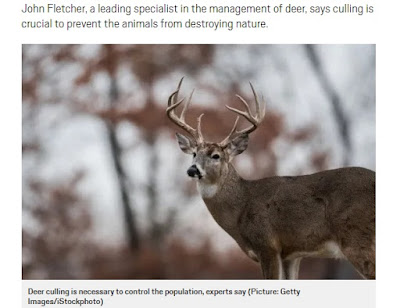 Don't think they were culling American whitetail in Ashridge, chum...

For once, they didn't immediately apologise. They defended their actions:


Mr Fletcher added that safety must come first while culling and deer cullers normally do their best to close parks or work early in the morning avoid public upset.

However, he argues ‘it’s good for people to understand what’s going on’.

He said: ‘In an area with a lot of walking around, it may be difficult to try and find a time where it’s possible to do it without people seeing it. My feeling is people ought to know about it and the more they see of it, the better.’

A little education is good for the soul, no?
Posted by JuliaM at 10:30

I assume they shoot the deer they are culling? If this is the case, isn't it a little dangerous in an area where there are dog walkers? What if they miss and the bullet ends up a stray? I would have thought there would be warning signs up at least.

She should've just asked for some to take home. Free food

What a naive complainant here. Gobsmacking. Where on earth does she think meat comes from and especially venison?

Catch Lyme disease from one of their ticks, and you'd murder the fecking lot of them - if you could muster the energy.

There were warning signs: blood, deer and men with bloody hands and a nice joint of venison!

In woodland, a miss is likely to end up in a tree. Oh, dear, won't anyone think of the saplings?

The brutal part of Conservation. Not a pleasant sight but probably far less traumatic for food animals than those exposed to the smell and sounds of the slaughterhouse, for hours of terror that precede death.

There is a big problem in many areas with deer numbers where I live now is the second area where deer have been a big problem, they destroy saplings shrubs anything overnight, they 'sample' and don't eat items but leave them dead, excluding deer is difficult and very expensive as they can jump over very high fences, yes culling should be encouraged.
As with all these re introductions to the wild it is forgotten that the natural predators have also been eliminated so you get this population explosion.

The trouble with people like this woman is they eat meat but can't envisage 'Bambi' on a plate.

If I began listing the creature I think need culling your blog would be closed down, so I'll leave it to your imagination.

"I would have thought there would be warning signs up at least."

"She should've just asked for some to take home. Free food"

I suspect she prefers her food wrapped in plastic and looking nothing like the animal it came from...

"Where on earth does she think meat comes from.."

As far as I'm concerned, her 'argument' was invalid long before that bit. But, yes, it's an aggravating factor.

"There is a big problem in many areas with deer numbers where I live now..."

A problem we can eat our way out of isn't the biggest issue, though.

"If I began listing the creature I think need culling your blog would be closed down..."

I suspect it'd match mine, somehow!