Newspaper Scoops Ain't What They Used To Be... 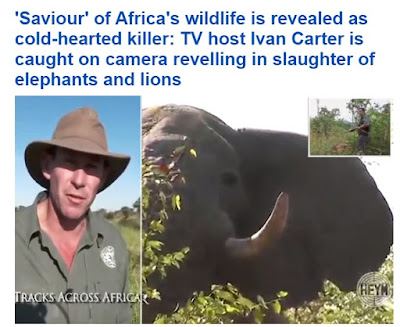 'Revealed'..? Was it a secret he was previously a professional hunter, then?

The 'journalists at the 'Mail' seem to think so:


The TV presenter and safari guide had been instrumental in one of history’s ‘biggest recovery projects’ that had seen dozens of big cats relocated to an area of Mozambique ravaged by poachers.

But The Mail on Sunday has unearthed an earlier video of Carter revelling in the slaughter of elephants and lions, and eulogising about the merits of a powerful double-shot rifle.

I 'unearth' videos all the time on YouTube. By using the search function.


According to records kept by Safari Club International, a US-based organisation dedicated to protecting the right to hunt, Mr Carter has helped clients to shoot some of the world’s biggest animals. Yet quotes attributed to Mr Carter on the ICWCA’s website say: ‘I have been truly shocked to find how precarious the future of our wildlife is.’

Well, yes. But not because of trophy hunting. That saves more species than wildlife tourism.


The claims are revealed in a new book called Trophy Hunters Exposed: Inside The Big Game Industry.Its author Eduardo Goncalves, who founded the Campaign To Ban Trophy Hunting, questioned the assertion that hunting aids conservation.

So you basically read a book and then decided to look him up on YouTube. Gosh. At least Carter's job is exciting. Imagine being a 'journalist'...


Defending the shooting of big-game animals, Mr Carter said: ‘If you are killing an animal when it’s old and when its genes have already been passed on, there’s no impact to the remaining population of wildlife. That animal can be used to generate revenue and protein for the local community.

‘We need to consider the most likely way for this ecosystem to support itself. I am very pro a sustainable non-hunting method, but other times the hunting model is the only one that can work.’

He said the video was his last for Heym because of the ‘emotional reaction that precludes people from being able to understand the conservation that happens behind it’.

Which the 'Mail' has just proven exists in spades.
Posted by JuliaM at 10:30

The same sort of thing happens in England. If it wasn't for the shooting fraternity we wouldn't have the beautiful small areas of woodland etc. that make our countryside so picturesque. It's easy to rush to judgement but at times it's a good idea to take the time to really look at the situation before you do.

When emotion, and not reason, is what drives you, it's more than easy. It becomes a reflex.