The Wisdom Of Playwrights…

The London riots will happen again unless action is taken to tackle the "burning anger" among the capital's poorer communities, according to the author of a play about the summer's unrest. 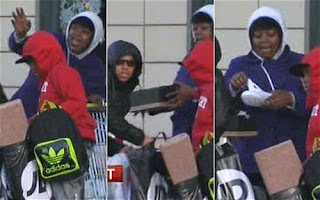 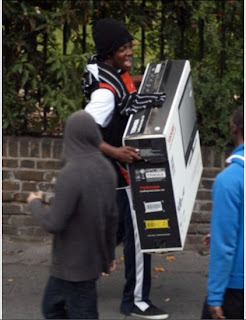 Strange how no-one's stealing food or medicine, isn't it? Or anything that might educate them out of their 'poverty'.

Gillian Slovo, whose work The Riots opened at the Tricycle Theatre in Kilburn last night, told the Standard that unemployment was to blame for the widespread looting that devastated London in August.

Hmmm, well, was it? Or was it lawlessness as a way of life?

Still, we should, apparently, bow to the experience of playwrights in the matters of crime and ‘social unrest’, shouldn’t we?

Ms Slovo said she had lacked the powers of a public inquiry to subpoena witnesses but was confident the play was a fair picture of events.

Of course she was ‘confident’. It mirrored what she assumed to be the cause, and so, therefore, it simply had to be…
Posted by JuliaM at 11:45

Email ThisBlogThis!Share to TwitterShare to FacebookShare to Pinterest
Labels: CiF, progressives, What the hell is wrong with people? riots

...no-one's stealing food or medicine, isn't it? Or anything that might educate them out of their 'poverty'.

Spot on and it suits an awful lot of people to ignore this. There's money in it...for them.

If you aren't part of the solution there's good money to be made in perpetuating the problem.

What about the bit scored out...

"The London riots will happen again unless action is taken to tackle the "burning anger" among the capital's poorer communities" ..


Gillian Slovo .. daughter of Joe Slovo .. did anyone really expect any better than this kind of drivel from her ?

The London (and other places too) riots will happen again & again & again until TPTH realise, accept & demonstrate that the colour of one's skin does not give one carte blanche to rob, steal, cheat, terrorise or in any other way ignore such laws as might be inconvenient to one's chosen way of life ..

For as long as TPTB continue to perceive skin colour as an acceptable reason for committing crime .. the rest of us, who's skin is not of the favoured hue will continue to bear the brunt of their muleishness .. and the costs of their "pets" lawlessness ..

When will these "poor" black communities start demonstrating against the black youth that is getting killed by - Oh thats right- other black youths? Or is it only police that are bad? Pathetic

What I want to know is how much of my taxes went into producing this tripe...

Seem to recall hearing that branches of Waterstones were riot proof as well. Funny, that.

If I wrote the play it would feature a layabout kid (colour unspecified) doing f-all in his council flat and playing on his state-provided play-station (playing grand-theft-robbing-bastards, probably) and getting a call on his mobile to go out and rob somewhere. He would turn off his flat-screen TV, pull on his new trainers, slip into his new shell-suit jacket, call other mates up on his crackberry and then go out and steal a pair of trainers, a new shell suit and a slightly bigger bigger plasma TV.

And there would be a narrator saying how this was a cry for social justice and the lack of opportunities (thanks to the evil Tories) were harming this mite and how he wished he had a dad but it was all someone else's fault and the problem is there's no EMA so what's the point of learning innit mate?

And when the joys of Marxism were explained to our hero he would utter the immortal line "Fuck off, innit," but then the light of truth would dawn in him and under a searing spotlight he would see a glorious socialist future where the latest plasma TV would be provided directly to him without him going out.

At the end of this tour-de-force the audience would applaud generously and toss state-provided fivers like confetti, weeping over how truth is finally with us, innit.

Henry Crun:'It was Joe Slovo that promised the ANC government would build a million houses in five years for black South Africans. '

Henry, the only thing slimey Slovo and his communist friends have 'built' in South Africa is a boiling marsh of cruelty, corruption and crime.

His lying daughter wants the same thing for England. And our taxes are financing it.

Can't believe she doesn't want to live in the Sud Afrika her pop and Nelson worked so hard to establish. Guess it didn't turn out quite so good when whitey left.

'It was Joe Slovo that promised the ANC government would build a million houses in five years for black South Africans.'

Luckily Cameron's taken up the baton and both will be coming to a greenbelt site near you soon.

"Or is it only police that are bad? Pathetic"

To the professional grievance-mongers, yes. There seems no mileage in telling your sheep that they are animals...

"What I want to know is how much of my taxes went into producing this tripe..."

There's no mention of grants, but then they are getting better at hiding that. They know we're looking.

"Seem to recall hearing that branches of Waterstones were riot proof as well. Funny, that."

It is also strange that WHITES seem not to have to riot for the same reasons, and the same "income". Just look who are in the photos.....

AND our "Governments" role over and open their legs wider than a Hamburg docks Seamstress, to take it ALL "on board".

Is there anything about 'necklacing' in the play? I guess Gillian would like the rioters - they have so much in common with her old man's former comrades - ethnicity,propensity for lawlessnes, murderous violence, gangsterism, disregard for property rights....

Has Gillian written any seering indictments of autocratic misrule in neighbouring Zimbabwe?