Four ‘Rotten Apples’ In One Car? What Are The Odds..? 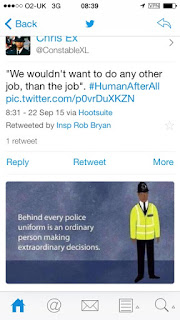 
Merseyside Police officers Pcs Jonathan Webb, Mark Higgins, Joanne Parr and Paul Birch had been travelling in a police car along Dale Street in Liverpool when they were flagged down by Tesco deputy store manager David Markey.

He asked them for help as a security officer Shaun Rigby apprehended a thief – named Roy Fagan – in the road after he had fled the shop.

The officers are subject to a misconduct hearing after allegedly declining to help.


The hearing was told that Pc Webb, who was sitting in the front passenger seat, wound down his window but declined to help saying he was not “kitted up” .

It is alleged that the police officers then drove off – all failing to provide either direct assistance or summoning another patrol to attend.

Mr Markey then called 999 but before officers were able to arrive, Mr Rigby was assaulted by Fagan “kicking or kneeing” him in the head.

It is the officers’ case that they did not see the struggle.

Well, no, they wouldn’t, would they, if they failed to get their fat backsides out of the car…


It is Pc Webb’s case that he maintains that Mr Markey did not tell him that a shoplifter had been detained.

So why did he say they ‘weren’t kitted up’ as an excuse?

Update: they’ve turned on each other, with PC Webb the fall guy, and the others claiming not to have heard the conversation, separated from him as they were by the spacious distance afforded by a police vehicle’s seats.

Still, it’s nice to know Merseyside farce is doing its bit for the disabled, by hiring so many deaf cops, eh?
Posted by JuliaM at 09:00

Email ThisBlogThis!Share to TwitterShare to FacebookShare to Pinterest
Labels: excuses, police out of control, public sector

Exactly the sort of common plodtrash who love 'there' job but prefer to spend 'there' time scoffing, idling or just doing something for themselves.

If we can stay with the barrel stench a little longer, what are the odds that plod would proffer the excuse 'I just forgot how to park on a hill' when a standard plodvan is abandoned to free wheel down a steep Pudsey gradient, and kill a pensioner, Julia?

Hey, come on, you know those donuts don't eat themselves. (Or do English cops eat a different type of deep-fried lard-based bakery product?)

Public employees are lard based. Job for life, unsackable, golden handshakes, golden helloes, index linked unfunded pensions, sick days aplenty, embezzlement, bribes, gerrymandering. Maybe we ought to have a revolution here, now how can we get certain newcomers on board without agreeing to Caliphate governance?

"...when a standard plodvan is abandoned to free wheel down a steep Pudsey gradient, and kill a pensioner, Julia?"

"Or do English cops eat a different type of deep-fried lard-based bakery product?"

Something fatty from Greggs (the ubiquitous High Street 'bakery' ) would be my bet.

" Maybe we ought to have a revolution here, now how can we get certain newcomers on board without agreeing to Caliphate governance?"

The corruption in their home countries won't (hopefully) be adopted here, one can dream..