No, 'Guardian', Once Again., You've Picked The Wrong Group To Fear...

I blame the Union Jack cushions. The problem with cushions is that they are inherently harmless and trivial. If you get upset about cushions, people will say, quite reasonably: “Why are you getting so upset? It’s only a cushion.” The harmlessness and triviality of cushions make them perversely important. They’re in our homes, on our sofas. Their innocuousness makes them a test of the very imagery and ideas we deem innocuous. And earlier this century the Union Jack became a very popular design.

*pedant hat on* It's the Union Flag. It's only the Union Jack when flying from a ship.

But why so terrified about the flag of your country?


The drive to make the flag literally huggable is terrifying. In becoming a home decor accessory, the Union Jack has been driven deep into the realm of kitsch. This should presumably delight those commentators who called for its reclamation (cushion accomplished!) but where is the liberal dividend?

Nationalism, in its least comfortable forms, is on the abundant rise everywhere we look, predictably accompanied by racism, division and hatred.

Really? I don't think it's the people who love their country's flag that we need to fear most... 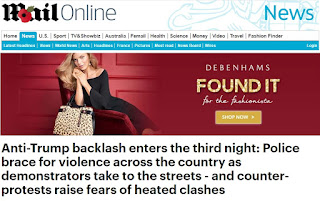 ...I think it's those for whom it represents something to loathe, and spit on, and set on fire, the instant they don't get their own way.

And that's true no matter what the pattern of red, white and blue it takes. And this 'Guardian' column spells it out even further:


From what I did overhear, they resented the very existence of the Republican party, and their scorn was reserved most for people who didn’t have the strength to stop this man from being even the nominee. Their banter contained the usual unfounded complaints about Republicans – we’re racists and misogynists – but also included comments about how truly weak they thought we were as people.

So I voted for Trump. I wanted to prove a point and vote against those types of people who had nothing good to say about us. But it also felt good to me to support the good people I know worked so hard in an election they were told was a losing cause from the very beginning. They fought for what’s right and treated me with a lot of respect even though I remained skeptical about our Republican nominee from the outset.

Ignore it at your peril, progressives.
Posted by JuliaM at 09:30

Email ThisBlogThis!Share to TwitterShare to FacebookShare to Pinterest
Labels: progressives, they don't like it up 'em, US Presidential election

She must be one of those people who George Orwell was speaking about when he said ‘There are some ideas so absurd that only an intellectual could believe them.’ I would go further and say 'that there are some ideas so trivial that only the intelligentsia would think they are not". I rank this cushion rant along with them pushing gay rights, diversity, multiculturalism and the like. Before they decided to make issues of them most people did not give a damn. Believing that not making more than a cursory fuss or addressing them in the usual pragmatic ways was sufficient enough for them to be solved or solve themselves(let sleeping dogs lie). By insisting on making them burning issues they have inflated them in a way that is completely out of proportion to the actual problem. Thereby inflating their importance that initiates harmful actions. Islamic terrorism a real threat is almost seen as virtuous by these people and is only of trivial concern. These hypocrites stand the world on it's head.

It's quite an attractive flag, I have seen people wear it in Colombia.

" I rank this cushion rant along with them pushing gay rights, diversity, multiculturalism and the like. Before they decided to make issues of them most people did not give a damn."

Spot on. Live and let live is my philosophy, but start telling me what to think, or that I must pay for something I disagree with....

It is often stated that the Union Flag should only be described as the Union Jack when flown in the bows of a warship, but this is a relatively recent idea. From early in its life the Admiralty itself frequently referred to the flag as the Union Jack, whatever its use, and in 1902 an Admiralty Circular announced that Their Lordships had decided that either name could be used officially. Such use was given Parliamentary approval in 1908 when it was stated that “the Union Jack should be regarded as the National flag”.