It's Not Down To The Police To Keep Your Son Safe...

...especially when a trawl through his social media gives the lie to your description of him: 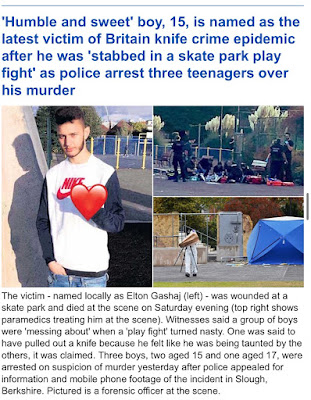 Anyone wonder if that heart is covering up a gang sign..?

Elton Gashaj, 15, was murdered during a pre-arranged confrontation between two groups of lads on Saturday night.


His mum, Vera Gashaj, said she had warned police that her son, who had a brother, Redon, 20, had been attacked previously after mixing with “bad people”.

She said: “I told the police my son was not safe. Two or three times he was in a fight. He had a broken arm. He told me he fell off his bike. He said he was OK. He got into the wrong crowd. He kept saying he was going to change.”

People who keep saying that, rather than actually changing, never will...
Posted by JuliaM at 10:30

Email ThisBlogThis!Share to TwitterShare to FacebookShare to Pinterest
Labels: gang culture, knife culture, parenting, personal responsibility, pull the other one

Reminds me of Theodore Dalrymple's line about his work as a prison psychiatrist when he said he'd often met people who fell in with the wrong crowd but never actually met anyone from the wrong crowd.

No coment from the father? Did he even know who his father was?
Penseivat

Surely he was an aspiring rapper/footballer/grime artist *
*delete as applicable.
Jaded

Vera Gashaj. Single mother once married to a Kosovan or Albanian. Nuke them all!

At least he didn't breed (hopefully), so that's one benefit he has given to society.
Penseivat

Penise may be trying to say that another worthless individual has passed on without burdening us with progeny. The result of which is no further detriment to society and that is not the same as a benefit. Examples of the latter would be sterilisation of all scum and identical treatment for the stupid.

Heh! Dalrymple is no fool.

"No coment from the father? Did he even know who his father was?"

That's another dead giveaway in these stories..

Can never be too sure these days!