”We got four men who can handle firearms - five with you, Ringo. Doc can shoot if sober.”

… bus operator First Cymru has suspended evening services in parts of a Swansea community following what it calls acts of "vandalism". It says the number 28 service will no longer serve the area around St Clears Place, Penlan, until further notice.

South Wales Police said they were working with the firm to tackle the problems.

One passenger, who did not want to give her name, said she had been on one of the buses when it was attacked. 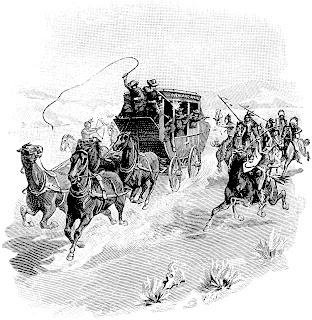 Via Wikipedia, the number 28 makes its way to St Clears Place…

However, the real problem is a little bit less exotic:

"The children round here have been throwing rocks, food, balls and anything they can get their hands on at the buses," she said.

"And it's not just in St Clears Place they are doing it, they are throwing things at the buses on Heol Cadifor too.

"I've been on the bus when they throw things at it, some of the people get quite scared.

Some of the children are as young as five and their parents are with them and they just don't seem to care. There's a sign on the bus saying they won't be coming up here after five o'clock. But the problem isn't just in St Clears Place, they are doing this all over Penlan."

Decoy buses are needed, filled with men armed with pump action shotguns. As soon as a missile of any description is thrown, the windows flip open and the shotguns fired. refuse services can pop round a short while later to clear up the mess - under armed guard too.

filled with men OR women....that should have read. Apologies.

The number 11 that stops at the cemetery gates always gets soggy roses thrown at the bus...its a right of passage for the hoodie wannabees

dearieme, isn't it a question of size? I always thought it was some kind of American ego-waving; "you guys just throw stones - we throw rocks".

BTW, some kind of award is surely merited for Julia's inspired choice of illustration.

What a country! And how wonderful that those children can express themselves so freely! Well done, establishment!

Keep it up and maybe one day we'll get all the way back to the Middle Ages so the kids can throw stones at passing donkey-drawn carts.

Of course when these darlings grow up the State (note the capital letter, peasants!) will provide enough money so they can all buy cars and not rely on public transport.

Of course, many of the cherubs will not actually hold a valid licence but it will be their 'European right' to drive like lunatics without licence, insurance or MoT.

The latter problem however will be solved by future eternal Labour governments who will hand over enough money to buy brand new cars and avoid the MoT hassle.

Blow up the Severn bridge and build a wall. We could get some subbies in from Judah.
They know a thing or two about keeping the peasants at bay!

Stones or rocks... I think you'll find 'we' also throw bricks. At least, that's what came through the window of a coach I was on a few years back as it made its way through north London on the beginning of a journey to Oxford.

The driver, who seemed somewhat unsurprised, pulled over, checked everyone was ok, and then carried on, while passengers relocated to the less drafty bits of the coach....

What these little monsters never grasp is that once they are adults and no longer the State's 'cheeldren', the State is going to shit on them from a great height. As will their own 'cheeldren'.

Ranter's suggestion would spare them from their horrible future. I would suggest not sending anyone to clear up though, just leave it all there and let the rats deal with it.

I bet we'd get lots of volunteers!

"BTW, some kind of award is surely merited for Julia's inspired choice of illustration."

It was the mental image that came to mind when I read the first few paragraphs! Plus, how good would it have been if the buses had been operated by Stagecoach? ;)

"Of course when these darlings grow up the State (note the capital letter, peasants!) will provide enough money so they can all buy cars and not rely on public transport."

Or will never leave the area at all. Certainly not for education or jobs...

"I would suggest not sending anyone to clear up though, just leave it all there and let the rats deal with it."

We'd need to get cracking on Mikebravo's wall then!

I have to confess that as a kid I did on occasion pelt buses with eggs. More specifically, the goal was to hit the conductor on the open platform of a Routemaster.

One afternoon me and my pals were so engrossed in this activity that we didn't spot the police motorcyclist almost immediately behind the bus.

We were given a very stern talking to indeed, and one of us earned a slap round the face for being cheeky to him.

The lesson was learned and buses (and their conductors) remained egg-free in our neck of the woods from then on.