I'm not, it can be said, a lover of modern art. And especially of modern sculpture which seems too often to delight in the grotesquely ugly purely for it's shock value.

But some modern art is just breathtaking - and this is - was, sadly - the epitome of such; Thomas Heatherwick's 'The B Of the Bang': 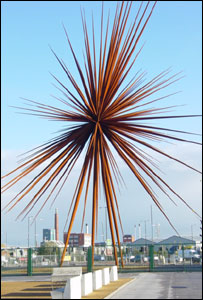 When it was announced I had some regular trips North planned for work, and I always meant to spend some time to go and see it while I was up there, and see if it really looked as amazing 'in the flesh' as it looked in pictures, posed against the sky like a 3D Lichtenstein cartoon explosion.

But it never seemed to work out.

Sadly, I never got a chance to see it - the build quality failed to match the artist's vision (and isn't that a metaphor for something?) and it was, tragically, sold for scrap. Surely a mistake, because what encapsulates the theory of 'modern art' better than the faint chance it will skewer some random Mancunians?

Next month: Landseer
Posted by JuliaM at 13:30

Sorry, but modern art does not hold dear to most members of the public.

I could puke on a piece of paper and declare it art.

Anyway, talking of modern times, 'car park death mum cared too much'. Another episode where authorities have fucked up and left the weak and vulnerable to make decisions as the only way they see out? Pilkington anyone? You miserable fuckers in authority will join the weeping sisters and be condemned.

These deaths can be prevented through decency and compassion, yet along you plough with your ignorance and uncaring for the lesser soul.

The hounds are calling.

I make the effort to be kind towards Artists. However, this Linford Christie inspired rust bucket fell down faster than he can run 100m aided by dodgy accelerants whilst the other, equally notorious Northern sculpture, oxidises far too slowly.

Bit of a bird-killer but there you go.

It does appear to be something that only a council could (dis)organise.

It belongs in the garden of one of Bonds enemies, who, alas, are thin on the ground.

I have omitted an apostrophe so if the punctuation police show up we can say you were looking after it for me.

That's not art, that's the Angel of the North being sucked towards an event horizon created by a singularity made up of super dense conceptual bullshit.

Personally I think most council organised 'art', this piece included, is complete and utter rubbish. Uninspiring, ugly, badly constructed, rusty and dirty, and it does absolutely nothing to enhance its location.
It's a gross insult to local taxpayers struggling to keep warm and feed their kids and yet forced to pay for it.
Get rid of it all and plant some attractive trees! At least they help absorb noise and polution and support wildlife.

If you mean this case, more like a case of 'mentally ill woman who unaccountably found a man to breed with her and who was left in charge of the children by unfit-for-purpose state services'...

"...whilst the other, equally notorious Northern sculpture, oxidises far too slowly."

The Angel of the North? Yes, I can't say I find that one all that pleasing to behold.

"It belongs in the garden of one of Bonds enemies.."

Heh! I see what you mean.

"Get rid of it all and plant some attractive trees!"

Sadly, local councils are more likely to cut down trees than to plant them!

So it was NOT fucking Liverpool then, was it!

Gosh. Hope it won't delay your review of 'Pickled Caecum in Glass Bucket' and 'Lucy in the Field with Flowers', Julia. Our Council has five million set aside for either treasure.