How Self-Declared Feminists Deal With Dissent...

It seems another councillor made the fatal error of not 'checking his privilege' before making a clearly humorous remark of Twitter. The unfortunate chap was one Peter Chapman, whose Twitter remark, while being kept waiting for a Starbucks, was:


“Terminally slow (and bad) service from the bone idle bitches and Costa Dorchester today, they all need a good beating.”

Now, had he said 'chaps' he'd have probably been home free. But this set off the feminists because this was, of course, dangerous and condoning violence to women.

Yes, I know, I've said the same thing myself about men and women - 'God, if he doesn't hurry up, I'm going to go postal!' 'Christ, if she doesn't get out of the way of the cabbages I'll move her fat arse with this trolley' -    and it's never crossed my mind to thing that someone would be so damnably stupid as to consider it 'hate speech enabling a misogynist world'.

But I reckoned without the crazy cadre of the sisterhood. Clearly, I'd forgotten just how deep the crazy flows there...

Well, I'm intrigued! So, I click on the link. 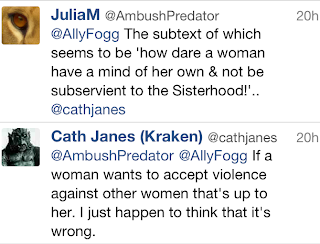 Now, do you think I got anywhere pointing out that there was no 'violence' here? Reader, I did not. And when her even more rabid followers turned up, it was Katie bar the door! 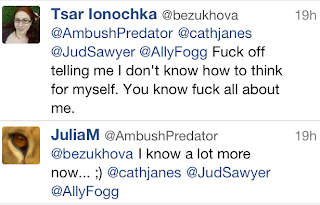 This caused a bit of consternation - clearly, this was a 'threat'. 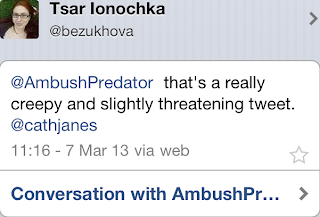 And the Sisterhood reacted as expected:

Wow! This 'Kraken' is a bit of a wimp when it comes to conflicting views, isn't it? Not so for Tsar Ionochka (face of an angel, mouth of a docker):

Now, savour the irony that this whole discussion arose out of language considered 'threatening and uncivil'...

Who said that by 'bitches' he meant women?

'Bitches' in that context could, more likely, mean both male and female people in the submissive sense.

"He's my bitch" is just as possible as "She's by bitch"

…and Jesus, they are a angry bunch on that blog! (Issues!)

That's why I left Twitter. I now spend my life trying to ignore these morons.

Having just checked @cathjanes twitter, she seems to have managed to write the following this morning without exploding in a fireball of irony:

"Can't blame Bieber for hitting a pap. If I was dressed like a giant, angry sperm I'd hit one as well"

Proof (if t'were needed) why we should fear Big Sister more than Big Brother.

It's all fun and tweets until somebody thinks out of line.

I enjoy a good 'Release the Kraken!!' moment of rage, especially when it's totally misdirected. It's made even funnier when they call themselves a Kraken online ;o)

For some reason though their reply to you Julia reminded me of a scene in Ren & Stimpy: http://www.youtube.com/watch?v=FT4YbO_1mvA

The trouble with Twitter is that these tedious sanctimonious bastards get recognised and their opinions get noticed. Whereas if the councillor in question was in my ward I would not vote for him, simple as that.

As for the woman with the Russian/Ukrainian surname a few anger issues there with her choice of language.

So the word 'hyperbole' doesn't exist in the feminist's dictionary? God, what a miserable bunch of people they are, determined to view the world skewed through the prism of feminist oppression.

Which explains everything: she's a troll.

Agree absolutely that the response was absurd but Chapman's comment was stupid in the extreme.
How cloth-eared and lacking in political awareness have you got to be to not realise how bad it sounds when a white male Tory uses the word "bitches" about minimum wage workers and suggests that they should be beaten (bringing to mind 19th Century mill-owners crossed with wife-beaters). This idiot presumably needs some people to vote for him who will identify more with the "bitches" than with him.
The comment may have been hyperbole but it displayed no wit, style, humour or obvious irony which would at least have made it defensible.
If I was a Tory I wouldn't want such an unpleasant, clumsy oaf representing me.

One would have thought it'd be only Tsarinas having feminist ideals.

Maybe "she" is a transgender?

Hell hath no fury like a skewered feminist, Julia. That some unfortunates call these kraken 'mum' is really monstrous.

Alice Walker (Democratic Womanism) was brilliant on the World Service today. The best bit was when she said that only indigenous women should be voted into power because white women were disenfranchised by the Witch-burning era, when "fear" entered their "bones and cells"....

It's at around 7 minutes in, on
https://soundcloud.com/bbc-world-service/newshour-alice-walker-iv

You don't have to have a potty-mouth to be exceedingly bonkers.

I'm intrigued. How does a troll, or any other being for that matter, cunt a vile?

What's Twitter?
Can you catch it off a toilet seat? Seems to me a lot of people have been coming down with it recently.

Having an argument with right on progressive lefties is always great fun, especially when they start saying you are being abusive for just stating facts that don't agree with their world view point

Thanks Moor Larkin (9 March at 16:49) for bringing the Alice Walker interview to our attention.

Now I remember why I haven't bothered to listen to the BBC for the last 20 years.

"Who said that by 'bitches' he meant women?"

Indeed! I never seem to see feminists of this stripe wetting their knickers at other cultures and their use of the term...

"That's why I left Twitter. I now spend my life trying to ignore these morons."

They are everywhere! The only sensible thing to do is point and laugh.

"Having just checked @cathjanes twitter, she seems to have managed to write the following this morning without exploding in a fireball of irony"

"So the word 'hyperbole' doesn't exist in the feminist's dictionary?"

I suspect it's a very short volume indeed.

"You don't have to have a potty-mouth to be exceedingly bonkers."

Oh, good grief! It's like there's some sort of competition amongst them...

So basically you're a callous jerk who gets off telling feminists they're hysterical useless idiots not fit to exist in your society?

Hello! I wonder where you came from...?