”Don’t you know that it’s different for girls?”

We all remember Alan Digby the ‘Beano’ editor, who gave that pompous brush-off to eight year old Jacob Rush, who had the temerity to question Dennis the Menace’s politically correct makeover:

'I would not say Dennis has been watered down, he has evolved as the character has done throughout his lifetime. He still has his catapult and peashooter, but does not use them against people any more.'

Imagine my surprise, then, on opening this morning's 'Metro'. It seems that his fellow Beano character does so quite happily, as long as it’s for charidee: 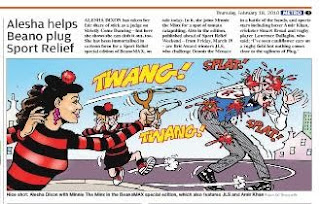 Or perhaps there are people in this world who will do anything - even compromise their stated principles - in order to be seen to be sucking up to the right people, eh?
Posted by JuliaM at 08:40

the female of the species is more deadlier than the male, don't you know

men and women are different. I know I have seen naked ladies and some of them look very nice.

violence is unacceptable unless a minimum force is used in self defence. So poisoning your husband because he had an affair is probably going to land you in court.

> violence is unacceptable unless a minimum force is used in self defence.

What a silly idea. Once violence has been initiated by a party, it's crazy to restrain yourself to a minimum. Even the law says "reasonable", not minimum.

yep, and my american friend told me if your going to shoot a robber shoot to kill because dead people can't give evidence

"Once violence has been initiated by a party, it's crazy to restrain yourself to a minimum."