A month or so back, a post over at 'Counting Cats..' had me thinking about just how awful a lot of modern housebuilding really was, particularly when, on a recent visit to Barking Town Hall, this monstrosity directly opposite caught my eye: 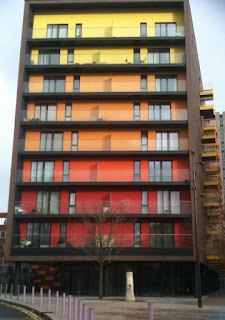 I mean, what was the architect thinking..? 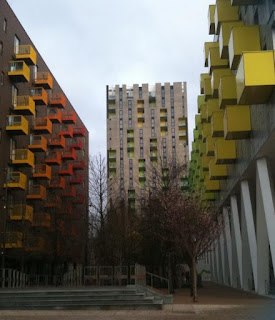 It must be catching too, because the scaffolding came down from a new development in Southend on Sea a few weeks ago, and oh, the horror, the horror: 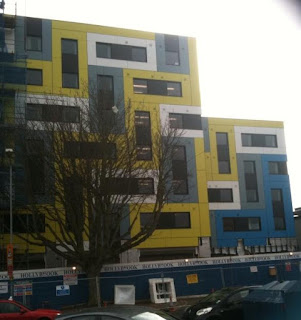 Well, Lynsey Hanley had an article in ‘CiF regarding modern architecture :

The level of public esteem accorded to both tower blocks and politicians is, for the moment, about equal. They fester alongside charity muggers and Ryanair in what David Bowie, in the 1986 film Labyrinth, termed "the bog of eternal stench". So what would you say if you knew that the next generation of soon-to-be-loathed and unfit-for-purpose housing was being thrown up under the government's watch?

The Kickstart "housing delivery" programme, through which £400m of public money will be administered to stalled and truncated new housebuilding schemes by the Homes & Communities Agency, has been given a kicking in recent weeks by parties including the influential Commission for Architecture and the Built Environment, the government's adviser on building quality.

It seems they aren't happy with the building picked out for this scheme, and if they are anything like the day-glo erections above, I'm not entirely surprised...

Under the first round of the programme, many schemes have been revealed as failing most of Cabe's Building for Life criteria. New developments are given ratings out of 20 according to the quality of design, surroundings, environmental credentials and likelihood of creating a sense of community. Some have scored as little as 1.5, with many others achieving 10 or less.

I wonder what those two would score?

In effect, the government is pushing through inadequate housing schemes in order to meet its target of having built 3m new homes before 2020. Disenchanted professionals have taken to calling the programme "Building Slums for the Future" in a nod to the government's other patchy mass construction scheme, Building Schools for the Future.

It seems that not everyone is willing to bite the hand that feeds them, though:

Yet they're not getting the support they hoped for among other design champions. Even David Birkbeck, the chief executive of Design for Homes, an independent body, has called Kickstart "a Marshall Plan for the devastated housebuilding sector. You don't just give emergency aid to the best dressed. The HCA is right to withhold support from only the very worst".

Which didn't sit too well with Lynsey, who had obviously seen even worse buildings than these two:

Really? There's already plenty of appallingly unattractive and family-unfriendly new housing that's been completed during the recession without the aid of Kickstart. My favourite of these must be a high-rise orange space crumpet named The Old Bus Depot, squashed into the junction of two busy A-roads near the M6 at Lancaster. Solely comprising one- and two-bedroom flats, its balconies enjoy uninterrupted views of a PC World superstore and the bit where the A683 splits off from the A6.

Now, it's fairly obvious that little can be done about the vista outside the window. But the design of the building itself? That's totally in the hands of the architects, isn't it?

I mean, who in their right mind would look at the two schemes above with pride, and say 'I live there!'..? Where does it come from, this desire to recreate on a giant scale the things you built with Lego as a kid?

And does anyone really believe that, in years to come, this period will be looked back on in the way that, say, the Georgian period is looked back on?

Update: The scaffolding has come down from the side too, and, oh, my... 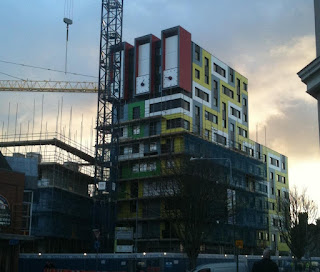 Are those dials supposed to be clocks? Or is it not a housing development at all, but a giant oven?
Posted by JuliaM at 11:40

Email ThisBlogThis!Share to TwitterShare to FacebookShare to Pinterest
Labels: architecture, What the hell is wrong with people?

And does anyone really believe that, in years to come, this period will be looked back on in the way that, say, the Georgian period is looked back on?

the things you built with Lego as a kid?

I doubt the up-and-coming architects of the 21st century ever built anything creative with Lego in the way we 40-somethings did - from the late 80's, Lego veered towards kits to build highly specific items and even stooped to film tie-ins - Harry Potter themed sets, anyone?

It seems I was right to worry about the brain-numbing stultification this would cause in future generations of designers.

And where do the architects themselves choose to live, I wonder?

That last one looks like its made of old doors like I remember allotment sheds being made of when I was a kid.

I believe that you can actually get lego houses. Real ones I mean. I could have been having my pisser pulled of course. I can't remember where I heard it. God, its bad enough when my wife decides to rearrange furniture. What a nightmare if she could do that with a whole house *shudder*

I mean, what was the architect thinking..?

I'd guess something along the lines of 'must go to Ikea at the weekend and see if they've got a bookcase that'd fit in that space at the end of the sofa'.

Oh, and if you ever come to Melbourne you just have to see Federation Square. You'll just love it...

It makes perfect sense as long as you fix in your mind that it is all for the benefit of the construction / 'home'building industry, not the hapless future occupants.

In the same way that London public transport makes sense only if you understand that it is run for the benefit of the employees, bot the commuters.

shame it doesn't seem to be being updated at the moment but very much worth exploring the archives for an hour or so.

I see you've noticed the new student accommodation in Southend then. :)

It's you oldens ruining it for the younger generation :P

I doubt a 20 something architect was allowed to design a building, you normally have to be abit higher up the greasy pole to be able to do that, and typically in your 40s

Good point, Anon, I stand corrected. I was confused by the resemblence of these buildings to GCSE DT projects.

It's beeen bothering me all day - where have I seen something like the Barking scene before. I've just realised - the scene in 'I, Robot' where all the old robots are stored in stacked shipping containers.

Actually, I have seen massive stacks of 40 foot shipping containers that look smarter and more convivial than those buildings.

"And where do the architects themselves choose to live, I wonder?"

"It makes perfect sense as long as you fix in your mind that it is all for the benefit of the construction / 'home'building industry, not the hapless future occupants."

Indeed. Selling them probably isn't going to prove difficult in the current climate, no matter what they look like...

Oh, indeed, though I'm not sure 'enjoy' is quite the right word! :)

"I see you've noticed the new student accommodation in Southend then."

Is that what it's planned to be?

I know it's on the site of one of the old college buildings that they knocked down in order to build the equally ghastly, though less colourful, giant new building near the station...

Yeah, that's probably going to get me some rather unfortunate Google search hits!

chop them down and plant some trees, simples ;o)

"chop them down and plant some trees, simples ;o)"

all the doctors i know take a pill for that and the architects tend towards plants like ivy because they destroy perfectly good buildings in no time at all.

trees on the other hand take care and are good for climbing and putting houses in, mostly

Have a look at "costa del basingstoke" in Google Images - Nice!

Can't all like the same things, or the world would be a boring place.

"Have a look at "costa del basingstoke" in Google Images - Nice!"