Malcolm Venton, 77, and partner Lorraine Ellis, 64, were among seven people in their street and 20 residents in the whole of Whaley Bridge to stay put.

He said: 'It's vindicated us really, I felt that we were never in much danger and that's proven to be the case.

A police woman this morning asked me if I was was one of those refusing to move and I sad (sic) 'yes'.

'She said that I was 'foolish' and told me 'we'll be the ones who have to retrieve your bodies'.

After you've completed all the paperwork and risk assessments and waited for backup, you mean?

And...yes, it is your job. Why is it somehow 'selfish' to expect you to do it, should it become necessary?


Local resident Chris George, 48, agreed and said: 'I didn't feel that I was putting myself in harm's way at all and tonight's decision I think reflects that.

'We are only just inside the 'red zone' or 'danger zone' so if anything bad happened I could have run 150 yards or so up the hill to safety.

'I've got a bag ready and packed with clothing and bare essentials should that be the case.

'I wanted to stay within the comfort of my own home, rather be here than some hotel or draughty school hall.

'I've seen the criticisms of those residents people who've stayed put and I can understand that but I really don't think I'm going to be putting myself or others in any danger.'

As it turned out, you weren't. Some will say it was luck, but maybe instead, it was a rational choice having assessed all the dangers?

Dangers that you, as someone living there, might be expected to assess more carefully that a state agent intent of following standard operating procedure...


Kaz Stringer, 47, and her partner Martin George were moved out of their town centre flat on Thursday and were staying with his 70-year-old mother Gillian when they were asked to evacuate again on Saturday.

All three refused and Kaz said: 'We'd already moved once and didn't want to do so again after only two days.

'Besides, this house is on a much higher point and is much better protected from any floodwater so we didn't feel the need to.'

Isn't it nice to see people not blindly obedient to the demands of a stranger in hi-vis? 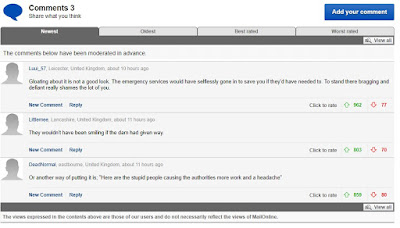 Email ThisBlogThis!Share to TwitterShare to FacebookShare to Pinterest
Labels: lazy policing, personal responsibility, the State is not your friend

Imagine the DM headline Julia if these people had got killed; "lazy police refuse to move residents"
Well done Queen of Hindsight
Jaded.
(Now let's have a post on the stupid haircut of the Derbyshire Asst Chief Constable. Now that is fair criticism of the police.)

Tumbling from quivering lips by reflex action, the coward's compendium of excuses has an exoneration for every occasion. Isn't that so, WC Jaded?

Sorry Melvin, I was busy undermining the foundations of the dam at the top of your road .
Jaded

It's a bloody awful dam that has been in trouble almost since the day it was built. The present problems relate to a concrete slab acting as an overflow spillway, constructed c. 1969 on a dam built c 1840, or the best part of 200 years ago.

Journalists are so stupid and ill informed: they should be asking who supervised the construction of anything since the 1930 Reservoirs (Safety Provisions) Act, and who has been doing the inspections.

As for whether to move out or not, I'd be damned if I'd live anywhere downstream of a leaking, subsiding, heap of who knows what like that.

Why can't we just let people make their own decisions and let them live with the consequences without judgment? We are all forced by our circumstances to make decisions on incomplete information, sometimes we will get it right and sometimes we will get it wrong. The real bad guys are the armchair warriors who are passing judgement after the fact. Predicting the past is very easy.

Anonymous, Have you sought help for your condition ? You must have been badly hurt by something/somebody to continue your attacks for so long.

'Now let's have a post on the stupid haircut of the Derbyshire Asst Chief Constable. Now that is fair criticism of the police.'

As an Ambassador for the police, Ms or Mr Swann honestly represents the 'service' for what it has become. Let's see more honesty from the police...what a refreshing change it will make!

There are two sides to this story - or more. I'm in favour of letting people stay put, if they want to. For example, even in the Blitz, a significant proportion of Londoners escaped unhurt (physically). And indeed, some who were sheltering suffered as badly or worse than if they'd simply stayed at home.

The problem is this. If it is truly believed that there is a hazardous location and time, then those sent in to do an evacuation believe that they are at risk, and therefore act bravely in their efforts to remove those affected to a safe place. If it turns out there really was no conceivable hazard, then the evacuation is seen as stupid - Peter crying 'wolf!' But if the hazard becomes a disaster, not only the stay-putters are affected, but also the rescue workers.

The next time, or the time after that, there won't be any rescue workers, because either they regard self-preservation as vital, or the regulations will get round to forbidding it.

"Right, now we won't attempt to get those people out of Grenfell Tower, because they want to stay put - we've asked them by megaphone and the answer has been ..."

Also, "We advise you to keep your seatbelt fastened during the flight ..." means "because you will cannon all round the interior of this cabin if you don't and we hit some undetected clear air turbulence, sustaining life threatening injuries to yourself and anyone you hit."

Each time the television news reported on the people who stayed in their homes, me and Mr Make It Stop cheered loudly.

Good on those people who stayed. We need more people with a bit of fortitude and we need fewer bleating sheep.

"Imagine the DM headline Julia if these people had got killed..."

Probably. So what? Do you police with one eye on the media, or the rights of the citizen?

"...they should be asking who supervised the construction of anything since the 1930 Reservoirs (Safety Provisions) Act, and who has been doing the inspections."

Ah, if only we had proper journalists.

"Why can't we just let people make their own decisions and let them live with the consequences without judgment?"

"The next time, or the time after that, there won't be any rescue workers, because either they regard self-preservation as vital, or the regulations will get round to forbidding it."

Human nature doesn't work like that. There will always be people prepared to do it.

"We need more people with a bit of fortitude and we need fewer bleating sheep."