"Have You Got A Licence For That Sense Of Humour, Sir?"

Gwent Police released a mugshot of Jermaine Taylor, 21, from Newport, south east Wales on Wednesday as he wanted on recall to prison.

But their appeal for help in finding him was met with facetious comments, with many choosing to use the opportunity for a joke. 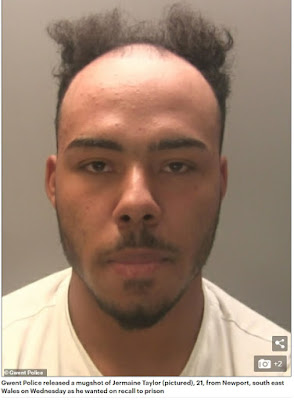 
Lea Hook wrote: 'He was last seen in town; Police are combing the area.' While Matt Price said: 'Push his release date back further than his hair line, that should teach him.'


... after the barage (sic) of comments, with some 80,000 now having been left, Gwent Police said: 'Please remember that harassing, threatening and abusing people on social media can be against the law.

'Our advice is to be as careful on social media as you would in any other form of communication.

'If you say something about someone which is grossly offensive or is of an indecent, obscene or menacing character, then you could be investigated by the police.'

If Boris Johnson and Priti Patel are serious about ensuring the criminals fear the police again, then the first way they could go about it is demanding that police social media departments are razed to the ground...
Posted by JuliaM at 10:30

'the first way they could go about it is demanding that police social media departments are razed to the ground...'

...or significantly trimmed back.

Insults about his appearance are not Jermaine to his behaviour?

'Insults about his appearance are not Jermaine to his behaviour?'

A misspelling or something subtle?

Poor wretch. And you can be certain his nickname was 'Jerms' at school.

Another own goal by the police. Why care about the feelings of criminal scum?
Jaded

If Patel isn't able to, or is prevented from, tackling this I'd more than happily conduct a cull for free.

"...or significantly trimmed back."

"Another own goal by the police."

If actual police run these things. Could be civilian staff for all we know.