The Intellectual Might Of The Left, In All Its Glory...

One of the delights of Twitter is the 'ReTweet' functionality, whereby people you are following can bring to your notice something said by someone they are following.

And so, I received a retweet from someone claiming that the phrase 'derp' (or sometimes, 'herp derp'), often used to indicate something particularly foolish, was - oh, horror of horrors! - 'disablist', as it poked fun at the 'intellectually disabled'. We were all commanded not to use it. 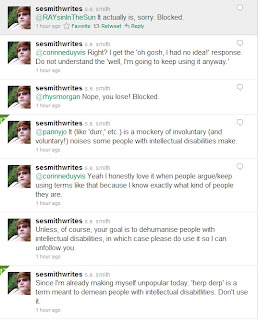 Intrigued, I took a look at the bio of the person claiming this. Yes, it was as I expected...
What was interesting, and enlightening though, as you can see from the image, is her method of dealing with people who disagreed with her bald statement of fact, and presented links to definitions of the term and the source of the meme itself to back that up:

Yup! She promptly blocked them.

This is the Twitter equivalent of sticking your fingers in your ears and going 'La la la la I CAN'T HEAR YOU la la la...'
Which, given that most of her interlocutors were of the left themselves, proved something of an object lesson for them... It's nice to see the fledgling left get a glimpse of their heroes (heroines?) with their panties on display, isn't it? Let's hope it provides an object lesson.
Posted by JuliaM at 11:45

Email ThisBlogThis!Share to TwitterShare to FacebookShare to Pinterest
Labels: disabilities, freedom of speech, hypocrites, left wingers eating their own, Twitter

"It's nice to see the fledgling left get a glimpse of their heroes (heroines?) with their panties on display, isn't it?"

Really, Julia, do be more careful what you say! The thought of S E Smith flashing her knickers has left me feeling quite unwell. I'm going to have to go down the local Wetherspoons now for a couple of litres of Polish lager to wash that image away.

There's only one way to respond to such shitwittery....DERP!

I had never heard the term Derp before. Is it related to Doh? Twerp? Mong.......probably.

Not being a Twatter user .. and having absolutely no intention of ever becoming one ..

I think I can safely claim not to give a rat's arse about this, or about the complete spacker mentioned in the article ..

Incidentally, at first I thought that "Derp" was the Hully-Gully pronunciation of "Dope" .. just as they render "Road" as "Rerd" .. ;)

She's so far up her own fundament (or fanny as they say in the colony) that she's emerged at the other end.

This gem from her site "media kit"

I am a genderqueer person and my preferred personal pronoun is ‘ou.’ I do not use declensions, and here’s an example of how to use it in a sentence: ‘Ou fed ou cat after his incessant whining made it apparent that it would be impossible to get any work done.’ If your publication’s style guide does not permit the use of personal pronouns other than she or he, I’d appreciate the use of whichever gender-neutral pronouns it does allow, or no pronouns at all. Please note that I do not capitalise my name.

She does not capitalise her name?

Then let me help here:

Captain Haddock, I am interested to know where you hail from as I live near to Hull but not near enough to be totally afflicted with the accent. karaoki versions of 'Are will Survarve' go like this:

"Err now goe, woak out the doe, just turn around now, 'cos yoer not welcome any moe" etc.

"I'm going to have to go down the local Wetherspoons now for a couple of litres of Polish lager to wash that image away."

Her moral outrage is seemingly not matched by any intellectual courage.

"She's so far up her own fundament (or fanny as they say in the colony) that she's emerged at the other end."

The bios that these people put up on the web are indeed often a whole lot funnier than anything they say or do!

Why use this shite when we have the perfectly good "Spazy twat!", at our finger tips?

(or if its a spaz, probably somewhere around the elbows. Which would appear to make picking ones nose rather awkward.)

Over the years, I've worked with a number of people from the 'ull area & always had to laugh whenever they mentioned "'essle Rerd" .. ;)

Unfortunately there's a lot of it about these days.

Mummy didn't give them enough praise or something.

Its really just bullying of a 2012 variety though, lets face it.