What do you suppose Southend Council were doing at the weekend? Gritting the streets? Catching up on the backlog of uncollected rubbish?

Well, no. None of those things. They were paying Sunday rates to indulge in The Great Tree Massacre of Victoria Avenue:

There was traffic chaos leading up to a busy Southend roundabout as trees were chopped down to make way for a new £25 million regeneration scheme.

Yup, in the middle of the worst weather seen for many years, and the accompanying travel difficulties, they chose Sunday for a bit of quick tree savaging, secure in the knowledge that by the time people could muster to protest about it, it’d be too late.

As a result, a nice, attractively-planted roundabout now looks like the Somme.

Anna Waite, Southend Council’s executive councillor for transport and planning, said: “We are extremely proud of this scheme, which will transform the entrance to Southend Town Centre.

“It will make it so much easier and more convenient for people to arrive via different forms of transport and get straight into the heart of the town.”

Say what..? I fail to see how this is going to ‘make it easier’ for anyone to get into the town.

And ‘different forms of transport’? Such as? Low flying aircraft?

They are just making it up as they go along, aren’t they?

Update: Here's the breathtakingly inviting vista that Anna Waite thinks was made hideous by the mature trees and bushes: 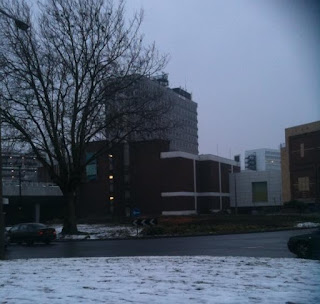 Email ThisBlogThis!Share to TwitterShare to FacebookShare to Pinterest
Labels: local councils, throwing money down the drain

Knowing Southend, one has to question why anyone would want to visit the town centre anyway.

I suspect "different forms of transport" is code for "there will be a great big f-off straight lane right across the middle of the roundabout, which will be reserved for buses, taxis, maniacs on pushbikes, and the chauffeur-driven limos of the councillors"

To defend Southend council I did see all three blokes from their highways department gritting a section of pavement as I walked to/from the town on Saturday morning. Rubbish hasn't been collected since Tuesday though.

As for the regeneration, I'll believe the claims when they come true...

And during a spell of cold weather when there is probably the least traffic on what is usually a busy road.

An excellent time to chop 'em down, causing disruption to the fewest travellers.

When would you have arranged it for????

The middle of the week, at the height of the holiday season?

Praise where it's due.

More tree fun over at Sanbanks, only there, locals want to cut down the trees and the council wants to preserve them.

big wall then fill with porridge, much better

sorry Julia but these trees look like the sad efforts for life that the charities parade on TV to try and part me with cash because someone in India keeps a tiger in their kitchen rather unsucesfully for the tiger and the people who are trying to cook breakfast.

"Knowing Southend, one has to question why anyone would want to visit the town centre anyway."

Certainly not for the shopping experience...

"As for the regeneration, I'll believe the claims when they come true..."

Me too. The vast, empty 'renovated' Victoria shopping centre is a case in point.

"When would you have arranged it for?"

Never. I wouldn't spend £25 mill on 'regeneration' unless there was something there worth regenerating...

"More tree fun over at Sanbanks, only there, locals want to cut down the trees and the council wants to preserve them."

Heh! Perhaps a swap of people is the key?

Sadly, I don't have a 'before' picture. That's the 'after', showing the inviting vista that will now greet unlucky visitors...

WFW, the only upside of AGW is that shitholes like Southend will be washed into the sea in a few years time.