"We Want People Who Are Representative Of The Community They Serve..." 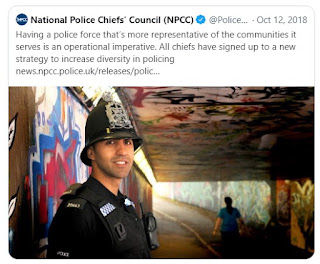 Eight police officers are being investigated over a WhatsApp group in which they are said to have made 'sick' jokes about Katie Price's disabled son Harvey.

The officers, based at Bexleyheath police station, south-east London, are accused of posting racist and sexist jokes, mocking black suspects and bullying a female employee.

Scotland Yard confirmed that the eight, all based in the same team in the South East Command, were on restricted duties while the investigation was carried out.

"No, we don't want people who share jokes with friends or have a social life."

Don't worry folks the fact that the top brass had signed up to something doesn't mean your going to get any more police or any better policing. They have been signing up to things for years but on the ground nothing changes and nothing will because the signing up is just another excuse for a publicly funded junket. My next promotion and my next pay rise is what is foremost in the minds of senior police and comes just above how do I keep the plebs quite while I climb this greasy pole.

"We want people who are representative of their community."
Considering that new recruits to the Police require a university degree, even if it's in oriental flower arranging, I wonder just how representative that is of the community? Having a Boris Johnson type qualification in the Greek classics, will not make you a good thief taker. Being a grduate with a degree in biology will not ensure that victims of domestic violence or abuse will be dealt with fairly. As a, now retired, thank goodness, front line Police officer of over 25 years, self discipline, training, compassion, and a lot of common sense is worth more than any degree, unless someone joins pure;ly to climb over everyone else to higher rank and sod the aim of protecting the Queen's peace.
I have worked with graduates, with people who failed the old 11 plus, or had as couple of GCSEs, and I would go for the two latter groups every time. One trainee refused to accept constructive criticism or advice from anyone she considered to be her intellectual inferior, which was everyone else in the Police Station, and was a danger to herself and other officers.
What the Police should have is someone with experience of life and who can relate that experience to incidents they deal with. Being a member of ISIS rowing club, or a cheaper version of the Bullingdon Club doesn't really prove ability when dealing with some drug addled scrote or a drunk driver. Unfortunately, only people below the rank of Sgt seems to be able to see this. Perhaps having an innocent Belgian electrician killed is one of the positive aspects Police recruitment is looking for?
Penseivat

Anon of the last comment must be in the Force, methinks.
He/she speaks whereof she/he knows.

I think these officers are toast. They will be sacrificed on the altar of political correctness. The Met will then smugly pat themselves on the back and make a big show of their sackings but as we know when you start kneeling to minorities it's never enough and they want more and more Danegeld.
Jaded

"I think these officers are toast."

I can envisage you doing absolutely nothing on 'there' behalf, WC Jaded. The sort of uniformed coward who watches poor swimmers drown rather than shoulder any rescue attempt involving a personal risk. So each of them is still worth more than a dozen of you?

Melvin I think you are losing the plot. What shall I do to stop them losing their jobs?
Come on, I'm all ears .
Jaded

Jaded,
Don't feed the trolls. Ignore him. This is how he gets his masturbatory kicks. He's even had a mention on Longrider.

"They have been signing up to things for years but on the ground nothing changes and nothing will because the signing up is just another excuse for a publicly funded junket."

"Considering that new recruits to the Police require a university degree, even if it's in oriental flower arranging, I wonder just how representative that is of the community?"

Well, thanks to Labour's barmy schemes, pretty soon they'll be giving away degrees in ceral boxes.

"I think these officers are toast. They will be sacrificed on the altar of political correctness. "

And if this morning's 'Mail' is right, they'll have another diversity hire to keep them company!