Vive La Revolution, Comrade! I’ll Be Over Here In The Wine Bar…

Stone was among a group of single mothers who were forced to get political when threatened with eviction from their hostel.

It’s quite simple, if you are dependent on the state for your housing, you are going to live where the state puts you. Which is often where it’s cheapest.

Want to live where you prefer? Then get a job & earn your own way.

The sob-story about a woman ‘cruelly evicted’ turned out to be about as truthful too (though Aditya Chakrabortty was fooled, but then…) :

“The former tenant was lawfully evicted on 25 March due to high and historic rent arrears,” a council spokeswoman said.

“The council made many attempts to help with her rent arrears since she first started having problems but she has not fully engaged with these offers of assistance. Officers are now working closely with the tenant to resolve her current financial and housing situation and has provided her with temporary accommodation until a permanent solution can be found.”

Put her in with the Stones of this world. Sounds like they all deserve each other.

And there’s something frankly obscene about the rabble-rousing CiF crowd cheering on the squatters while living lives every bit as ‘disconnected’ from ‘the poor’ as they claim the Tories’ lives are, isn’t there? 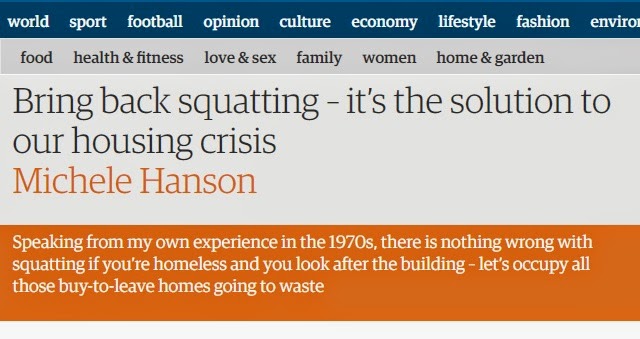 So long as the squatting doesn't take place in nice houses in Highgate and Islington, of course...

Squatting is the solution is it?

OK, we'll wait till you pop out to your local organic wholefood fairtrade LGTQWERTY-friendly safe-space winebar and then ... squat in 'your' vacant property and see if you still feel the same way shall we Michele?

I dearly love (/sarc) how such people 'always' support and encourage behaviour against other people that when perpertrated against them suddenly becomes quite another cooking utensil of pisceans. Hypocrites the lot of them!

Want to live where you prefer? Then get a job & earn your own way.

And even then it's not all plain sailing.

This woman - I presume it's a woman- should prosecuted for incitement.

"So long as the squatting doesn't take place in nice houses in Highgate and Islington, of course..."

"...and see if you still feel the same way shall we Michele?"

It's all fun and games until it starts to affect them personally!

"This woman - I presume it's a woman- should prosecuted for incitement."