It's Called A Fait Accompli....

Chaucer House, in Chestnut Grove, Southend, has been converted from a women’s refuge to general accommodation for the borough’s homeless. However, some residents in the area have voiced concerns.

Which they would have voiced a lot sooner, if they'd only had the chance to do so.


They are upset they were not consulted and claim the new facility is attracting antisocial behaviour, excessive rubbish and parking problems.

Given the issues they cause in the high street, it's hardly surprising!


Traci Dixon, group manager for Support Services at South Essex Homes, said: “We have arranged a meeting to discuss these issues.

Why didn't you arrange one to discuss the conversion? Because you knew the rough ride you'd get!


“We will also use this opportunity to reassure the community that, while we feel there is no need for concern or alarm, any antisocial behaviour reported to us will be investigated and managed appropriately.

“Alongside these general concerns, issues around car parking and rubbish at Chaucer House have also been raised by residents which we are looking to resolve very soon.

“We would encourage local residents to attend this meeting - being held on Tuesday, November 28 at 7pm in the Civic Centre - to discuss any issues they may have.”

The usual do-gooders infest the comments to accuse the residents of NIMBY behaviour, but they didn't object to the women's refuge, as pointed out in a comment rebuttal: 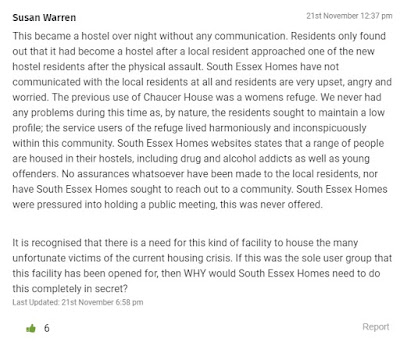 I wonder where Traci Dixon lives..?
Posted by JuliaM at 10:30

Where does Traci Dixon live?

Not near the homeless hostel is a given.

Find her and put in stocks

It could be a new town centre attraction! Better than the sadly departed Millennium Clock...