"Who Are You Going To Believe, Me Or Your Lying Eyes (and Ears)?" 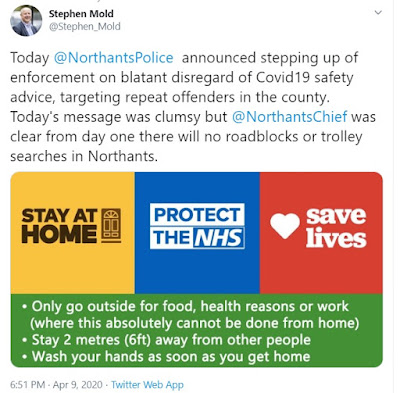 That's Stephen Mold, the Police Fire and Crime Commissioner for Northamptonshire, trying desperately to explain away the extraordinary outburst by his Chief Constable.

The one he made on camera.

To the world's media. 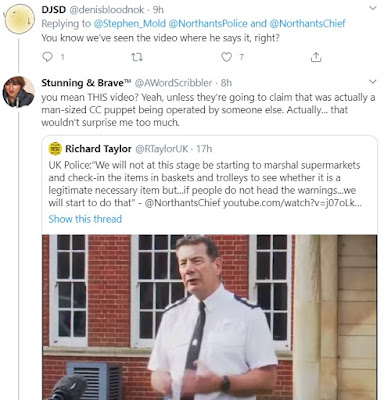 That's not a 'clumsy' message. That's a very clear message. And it was clear enough for the Home Secretary to emerge from wherever she's been hiding in the past week and slap him down firmly.

Now, people I like and follow on Twitter have said that this isn't a sign of an incompetent out of his depth, that he's a very good police leader and has improved the force.

But given that someone in his position should a) know the law, and the limitations and b) have received expensive media handling training...then questions need to be asked.

As with so many areas of "public service" they rise to the level of their own incompetence, overseen by those who want to protect their own jobs and have a handy scapegoat when everything goes tits up.

wherever she's been hiding

I must go easy on those lunchtime G&T's. Or perhaps my recollections of 'Nick' announcing his BIG PURGE on shoppers to the World's Press, were pure fantasies? You know, who in their right mind could believe that police resources were about to be squandered on shopping trolley audits and setting up road road blocks to catch out shoppers who had made unnecessary purchases at their local supermarket?

Doncha' think that this reported speech, if it can be believed, was purely a crafty ruse to catch looters and shoplifters off guard, JuliaM?

The overzealous behavior and what appears to be a disparity in how different groups are being policed during this crisis will I believe remove the last vestige of respect that the ordinary British subject, those with more than half a brain that is, has for the police. The ordinary nominally law abiding Briton is now starting to feel the force of our cowardly and bent police forces, something that people like Tommy Robinson have been having to put up with for years for the 'crime' of calling attention to the massive number of Muslims who engage in sexual crime.

I wonder if in the future there will be many more Britons who in the past might have either given the police no thought at all or may have supported them will in the future mutter 'scum' at the police after seeing them go all hard man on dog walkers whilst doing the square root of sod all about members of those groups who seem to think that British law really doesn't apply to them?

"I'm a bit unsure what is essential. I was at the supermarket yesterday and bought some laxatives. I'm not sure if this is legal. Should I go on the run?"

Stephen Mold is real? All I ever get from his office is a load of copy and paste when I write to him. I had sort of formed the opinion Stephen Mold was only a computer algorithm and black hole bank account. You learn something every day.

I expect there are quite few police officers who don't want to alienate the public with silly statements and ill-considered pranks like examining shopping baskets and chasing dog-walkers with drones, but equally there are some ossifers who prefer to go after the low-hanging fruit and leave the difficult bits--like law enforcement--to others.

A good number of people are beginning to think, sadly, that 'serious crime' now involves legions of people checking for hurty words on social media about gangs of the non-law-abiding wandering the streets looking for the vulnerable. As I don't read the Guardian I am less susceptible to accusations of 'rayciss' behaviour but maybe that's where some our top bobbies get their information and thus decide policy.

"...they rise to the level of their own incompetence..."

He seems to have a lot of support, even despite this.

"...will I believe remove the last vestige of respect that the ordinary British subject, those with more than half a brain that is, has for the police."

"Stephen Mold is real? All I ever get from his office is a load of copy and paste when I write to him. "

"I expect there are quite few police officers who don't want to alienate the public..."

It's noticeable that all those who have come to prominence are of a certain...type. A type that the police HR teams tell them they need for diversity reasons.

Remind me again. What is a police uniform.
I would not want to inadvertently be charged with impersonating a police officer next time I have my daily walk with five days of scruffy beard growth.

The beard growth is ok, Doonhamer. Just be careful not to step out in public with a strap-on gut enhancer and clothes sporting egg yolk or takeaway stains.