It'd Take A Heart Of Stone, Wouldn't It? 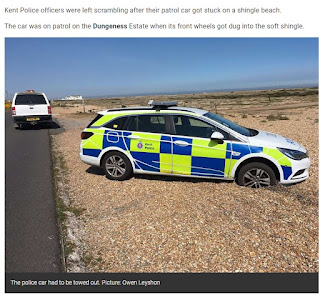 I seem to recall that driving on poor or soft surfaces was drummed into me by my father before I even sat behind the wheel of a car. It's pretty basic and ground level stuff to not drive on shingle in vehicles that are not designed to do so. Where on earth are police forces getting these morons that they have working for them from?

In the motor racing world that I used to inhabit, that's known as putting it in the kitty litter. Feckin eejits.

Just how much danger did the air fresh off the North Sea pose? Just another daily demonstration by plod of their folly. When can we dock salaries?

It is fortunate that their journey was not essential.

In the late 60's, in Essex, the humblest form of motorised policeman was the one in a minivan and, as motoring teenagers, we respected them. Apart from anything else we assumed that they were drivers trained to a certain standard - after all, they were the ones who judged our driving and heaven forbid if we were not good enough.
That view respect vanished the day we post "A" level 6th formers had a day out at Chelmsford Driving School - classroom, passenger in a school car on Essex roads and the SKID PAN.
Unfortunately for Panda van drivers the classroom instructor said that because of political pressure to have them out on the road, most of them were sent forth with pink slips, not full licences.
Maybe Kent are in the same situation today?

"...driving on poor or soft surfaces was drummed into me by my father before I even sat behind the wheel of a car...."

It should be part of the existing training, yet it wasn't when I learned. Doubt it is now.

"It is fortunate that their journey was not essential."

"Maybe Kent are in the same situation today?"