"But We Took A Knee! And Let You Run Riot In The Capital!" 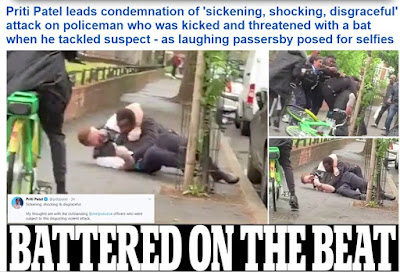 Gosh, why indeed? It's a puzzle, isn't it? Allow me to refresh your memory a little: 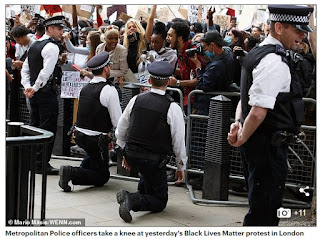 The simple answer is: "Because you let them think they could get away with it..."

It's called 'consequences'. Of weak, vitruesignalling 'leadership'. Of cowering before a mob.


The Metropolitan Police Federation, which represents rank-and-file officers, said attacks on officers seem to be increasing, adding: 'Yet again this starkly shows the dangers @metpoliceuk face and the bravery they show each and every day keeping Londoners safe.'

Not all of them showed 'bravery'. I wonder if seeing their colleagues kicked to the ground gave them a twinge of guilt?

There's predictable condemnation from all those who previously sowed the wind, but will never find themselves on the streets to reap the whirlwind. But one man gets it:


Shaun Bailey, the Conservative candidate for next year's London Mayoral elections, linked the incident to the Black Lives Matter protests, which saw police criticised for failing to take a tougher line with demonstrators. 'This is what happens when you try to appease the mob,' he tweeted. 'You lose control of the streets.'

Maybe the Police Federation needs to look a bit closer to home?
Posted by JuliaM at 09:00

Time for the government to tell the police to take the gloves off, methinks. But, they won't.

That female police officer looked about as effective as a chocolate teapot, just look at how uselessly she weilds the baton but "muh diversity", right?

Perhaps now the penny might drop within the thick skulls of PC Plods that its not a very good idea to p*ss off the law abiding majority by becoming a 'woke' police force. Not while you've still got to deal with the criminal and diverse elements of society who actually want you dead.......

"... and the bravery they show each and every day keeping Londoners safe."

Crikey, have we seriously misjudged these valorous sentinels?

So many ungrateful taxpayers have been cruelly thinking that plod were dodging work in order to invent 'there' latest compensation claim, or busy manipulating a permanent excuse for chronic absenteeism. Kneeling on the necks of vulnerable motorists and maintaining those craven bellies at or above regulation girth, are nothing if wicked genres of folklore?

Given the relish with which the police bully motorists and ordinary people during the lockdown, I'm not surprised that ordinary people laugh when they get a kicking. I know that in this case they were mostly protesters with an anti police agenda, but most of the rest of us view the police with contempt these days.

Every day the rise of organisations like the English Defence League draws nearer. Sooner or later we might come to regard the actions of the old EDL and their like to have been restrained and moderate. The Police have proved themselves to be partisan and unable or unwilling to control the situation, they might come to bitterly regret that when they see those that rise to fill that particular vacuum.

Fairplay to the male officer for holding on to his man despite the growing crowd of hostile and to the female for standing up to a guy much bigger than her.
Not their fault the met is run by dick(s).

Pitifully unsuited physically for the job, yet Dick wants a 50% female Farce.

Still feeling that warm glow from kneeling to BLM, officers?

#Kneelgate is sparking much debate on our internal Met police forums.
Shiny arses and ladder climbing officers are falling over themselves to pander to the mob. I look on their profile and see these people are in nothing jobs behind the scenes. Officers like me who are uniform front-line condemn this action, but we are getting drowned out unfortunately.
Like the last days of the Reich our senior leadership live in an echo-chamber . They won't change.
Jaded

"The last days of the Reich..." Are you taking the knee, Jaded?

That's plain enough, WC Jaded. It is all the fault of 'senior management'. Throwing yourself into the lifeboat ahead of anyone else, protesting with the first words of panic that always gush from a coward's throat?

That you did not refuse orders to act cowardly, or opted out of these disgracefully timorous scenes, amounts to collusion. As the Nuremberg Trials established, nauseous blame-shifting can only be considered in mitigation.

Let me explain in plain English Melvin (not Latin, only pompous oafs use that). Policing is a uniform disciplined service. If I am given a LAWFUL order, I have to do as i'm told. Policing isn't a democracy or run by committee.
I can disagree but not disobey. Despite what you think I've never been ordered to write a speeding ticket for 31mph (which is one of you repetitive lies) or kneel on a motorists neck.

Sobers-I take your point but as above I've explained. Police are not allowed a union or to strike. We can only show our displeasure in very minor ways but we are generally ignored. Officers are leaving in droves and being replaced by untrained newbies. Every PC cannot get together and leave, we have bills and mortgages.

I am leaving soon as my time is nearly up.

"Time for the government to tell the police to take the gloves off, methinks. But, they won't."

But, they did! This weekend. When they faced 'far right thugs' and 'football hooligans'...

Not even that effective!

Those for whom it does will leave. Thus further reducing the standing of the police in the eyes of the law abiding majority.

"Sooner or later we might come to regard the actions of the old EDL and their like to have been restrained and moderate."

It does seem very much as if a race war is not so much feared as encouraged, in some quarters. Some very surprising quarters, at that.

" I look on their profile and see these people are in nothing jobs behind the scenes."

Of course! They might have a different opinion if they ever left their cozy office post for the streets of London...

"Policing isn't a democracy or run by committee."

Is it even policing anymore?

" Policing is a uniform disciplined service. If I am given a LAWFUL order, I have to do as i'm told."

The last lot who tried the 'I was only obeying orders' defence didn't get very far with it if I recall.........regardless of that, you are free to leave the force at any time if you find the orders not to your liking. You are not in a conscript army. You and your colleagues who disagree with the direction the force is taking are choosing to stay and thus are perpetuating the problem. You are therefore complicit in whatever happens as a result.

Sobers, you are correct. The Nuremberg Principles established that 'superior orders' is not an excuse for a bad action. Whilst it may be comforting to say that 'I have to obey a lawful order', it helps to remember that the orders given to the police, armed forces and others by the Nazis were lawful in the context of German law at the time. My view of the current emerging scandal, as Longrider pointed out, of Hertfordshire police virtually ordering their officers to kneel to BLM/Marxist thugs, is that these particular orders contribute to the breakdown of law and order and further alienate the police from the public.