Ex Libris: ‘The Mists Of Avalon’

In my time I have been called many things; sister, lover, priestess, wise-woman, queen. Now in truth I have come to be wise-woman, and a time may come when these things need to be known. But in sober truth I think it is the Christians who will tell the last tale. For ever the world of Fairy drifts further from the world in which the Christ holds sway. I have no quarrel with the Christ, only with his priests, who call the Great Goddess a demon and deny that she ever held power in this world. At best, they say that her power was of Satan. Or else they clothe her in the blue robe of the Lady of Nazareth – who indeed had power in her way, too – and say that she was ever virgin. But what can a virgin know of the sorrows and travails of mankind?

And now, when the world has changed and Arthur – my brother, my lover, king who was and king who shall be – lies dead (the common folk say sleeping) in the Holy Isle of Avalon, the tale should be told as it was before the priests of their White Christ come to cover it all with their saints and legends.

I remember being attracted to the cover of this – it was in the WHSmith in Ilford, and I’d gone there to pick up a book I’d ordered as a present for a friend. Can’t for the life of me remember now what that was, or even who it was for!


But this had just come in, and a young lad was stocking the shelves, and it caught my eye. 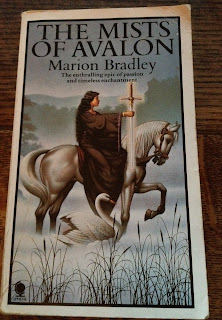 It seemed as heavy as a brick, and the 1009 page count made me think it'd do at a pinch to keep me busy for a while!

In truth, I think it took me about four days, on and off. It was utterly enthralling. It's basically a feminist retelling of the Arthurian saga, and as horrible as that might sound....it works! The characters are familiar, yet different, and the emphasis is placed not on the battlefield of horse and sword, but on a far more subtle way of waging war.

Like many of this year's choices, it was languishing in development hell for quite a while, with various names attached, and finally got made with (what else?) an all American cast. Given how awfully or disappointingly  my other picks have turned out, I've never quite managed to bring myself to order it, and I've never yet seen it on TV.

Years ago I picked up a second-hand copy of this book in a great used bookshop at the bottom of the hill in, of all places, Glastonbury. Yes, it was a good read and no I haven't seen the screen version. I can't see how a screenplay could do the book any real justice.

I agree; I can't imagine an acceptable adaptation - but then I'm one of those people who sat through "Return of the King" with my head in my hands muttering "Wrong...wrong...WRONG!"

I can't see it working without some heavy-duty editing in places, if only because male viewers are likely to have difficulty with the whole lunar-cycle feminine mysticism thing.

BTW, my favourite Mists of Avalon reference is from 'Signs that you may be a Pagan': no. 18.

You think The Mists of Avalon should be a religious text. You use it as such.

The clips on Youtube do not look encouraging. For a start, they seem to have it set in the 12thC rather than the British Romano period.

Besides, it's a book which has properly detailed characters, which is why it is long. These are not sketches.

The one which is crying out for an film, and a racy one at that, is Rosemary Sutcliff's Sword at Sunset.

" I can't see how a screenplay could do the book any real justice."

With enough money and really good scriptwriters, you can produce good stuff.

"BTW, my favourite Mists of Avalon reference is from 'Signs that you may be a Pagan': no. 18."

Oooh! I might have to have a peek (between my fingers) later...

Having read the novel, the plot, characters and events are so terribly misrepresented that M. Zimmerman-Bradley is spinning in her grave. Read the novel and see just how much Ted Turner, et alia, has shredded what was a﻿ major piece of literature. This should have been called the "Mists of Disney's Noxious Camelot."

I don't know, Julia. Next thing you'll be admitting to owning the complete Chronicles of Gor.

I'd love to read his literary review of 50 Shades. He's done nicely out of Gor - Wiki says it is still in print - but his estimated 12m sales over years doesn't reach her instant 20m in one big hit.

More pain; they didn't even have to commission artwork for the cover. A photo of 99p bit of cardboard; that's not artwork, that's a catalogue shot.