When Did We Decide This?

'This' being the idea that changing our habits and our lives and accepting restrictions in response to a terrorist threat was a good thing, and not something that would mean the terrorists have won?

Not much more to say about the M6 bus debacle that hasn't already been said by SBML, Leg-Iron or Anna but I was struck by just how many comments to websites and especially newspapers seemed to think that this - the sight of innocent passengers herded onto the tarmac and guarded by gun-toting police for hours - was acceptable.

Acceptable because 'You can't be too careful!' and 'What if it had been a real incident!' and 'Well, there's the Olympics to think about, after all!'....

All said as if that was a perfect justification for the way the passengers were treated!

The police, of course, are in CYA mode, and idiots like these are helping them do it:


The police spokesman added: 'Given the nature of the report, we responded swiftly and proportionately, treating the information as credible and extremely seriously.'

The force rejected suggestions it had over-reacted and said a 'sufficient number of officers attended the incident'.

Oh, right. It wasn't a case of 'Send everything!!!' then? Because I couldn't help but think it'd be a god time to be a mugger or bank robber in Tamworth while this was ongoing...

Over at Inspector Gadget's blog the attempt to excuse the inexcusable has reached epic proportions: 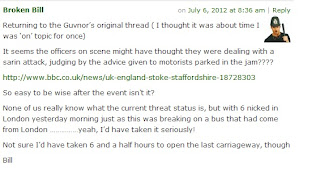 Oh, gawd!! Why stop there? I mean, if you are going to make up a scary story to excuse your overreaction, make it a GOOD one!

Go for weaponised anthrax, bio-engineered Ebola, or maybe even VX (‘Your muscles freeze, you can’t breathe, you spasm so hard you break your own back and spit your guts out. But that’s after your skin melts off’).

Hell, say you suspected the zombie virus from ‘The Walking Dead’. You aren’t going to look any stupider than you already do.
Posted by JuliaM at 09:30

You missed this bus but you can get one every few minutes to Plod Circus.

I daren't look at Gadget's site about this! I can only imagine. I agree with broken Bill though - why did it take so long to open up the motorway? I do know why actually - the whole incident - in reality - became a training exercise and the senior officers 'in charge' justified it by including the word 'terrorism' in every sentence they uttered. I'm sure the fact that this was an 'L.O.B.' became apparent very quickly after first units turned up. The passengers and the rest of the motorway using public and everyone elese affected were treated very, very badly by the police on this occasion. No common sense at all but it will look good on several CVs in force.

I have a Pot Noodle and I am not afraid to use it.

"I daren't look at Gadget's site about this! I can only imagine."

"I have a Pot Noodle and I am not afraid to use it."

Well, quite! As I pointed out at another police blog, the terrorists & mischief-makers now know how to cause maximum disruption for minimum risk, don't they?