Oh, I Think You Soon Will Be ‘Sitting In A Court Of Law Again’…

…albeit not in your usual seat:

A judge who launched a foul-mouthed tirade against the British justice system after being found guilty of owning a dangerous dog was at the centre of a fresh police inquiry yesterday.

Judge Beatrice Bolton, 57, vowed never to sit in a court of law again after she was found guilty, branding the verdict a ‘****ing travesty’.

She’s under investigation by the judicial ethics people, who seem to be taking their own sweet time…

Police are now investigating claims of a fresh dog attack at her home after a postman was bitten on the thigh and buttocks last weekend. The Royal Mail is so concerned about the safety of its staff it has suspended all deliveries to three properties, including Judge Bolton’s, because of the ‘danger’.

It seems the judge is relying on the ‘no, not my dog this time!’ tactic:

The police have taken statements from neighbours and are investigating the attack. Sources said Mr Auld told the police that he believed the dog belonged to the £140,000-a-year judge. Mr Auld’s wife, Susan, last night insisted: ‘It was her dog.’

But Judge Bolton said: ‘It’s not my dog.’ Referring to December’s court case, she added: ‘Will you kindly stop publishing that my dog took a chunk out of Frederick Becker, because he didn’t. Everybody agrees that the injury was a scratch. ‘I am warning you that if there is any inference at all that I was involved or that it was my dog, then you are going to be in trouble.’

Maybe that gave the caption guy pause, because there seems to be a bit missing: 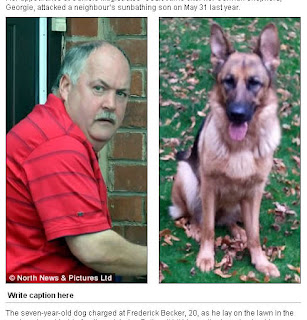 Maybe they’ll have a doggy ID parade? Do they work? Can you tell one crazy, out-of-control bitch from another?
Posted by JuliaM at 12:10

'Stupid is as stupid does' and the quaint outburst from this uniformed loonie provides a clue to unlocking the mystery why so many rulings defy sanity.

I think we need to know.

I wouldn't have walked up her garden path in the first place ..

Just in case she answered the door ..

Talk about the wrath of the Gorgon ..

"...provides a clue to unlocking the mystery why so many rulings defy sanity."

It's a little worrying that so many seem to have personality disorders.

Do they select for those, or is it an occupational disease?

"Talk about the wrath of the Gorgon .."

We can't all be blessed with good looks, but some of us make up for it with a great personalit...