To Be Fair, I Can't Think Of A More Appropriate Place... 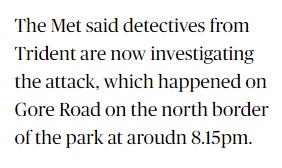 As progressive policies and practices increases so does anti-social behaviour. It can be seen that aggressive crime is more prevalent in areas controlled by the left. True those areas population are generally the poorest and obviously the most intellectually challenged as despite the evidence continue to allow the left to control them. Even though year after year their situation does not improve. In fact it mostly deteriorates.

One has to wonder how humans have survived as long as we have because we do not demand that which harms us should be stopped but we should have more of it. Government, socialism, lefty progressiveness, illiberalism and the like constantly prove that they fail and are the problem not the solution. Free market capitalism, tradition wisdom, standard and values, liberty of thought and expression and the like work and address our needs and solve our problems.Yet most will opt for the former and decry the latter. The answer why is greed, ignorance and short-termism. The later is not without it's failings but unlike the former it has not totally failed and the latter does have a mechanism to correct those failing which if it is allowed it will use as it has often done during it's evolutionary process.

As Trident are investigating, I don't think this involved 2 white boy scouts. If Black Lives really do matter, perhaps they can stop killing each other.
Penseivat

"...year after year their situation does not improve. In fact it mostly deteriorates."

Surely it has to hit bottom sometime?

"As Trident are investigating, I don't think this involved 2 white boy scouts."

I don't know, once maybe, but don't they do all gang crime now?