Charley Nathan and Karen James, owners of AA Dog Rescue, of Burnham Road, Latchingdon, must pay more than £20,000 in costs after admitting the two charges at Chelmsford Crown Court on Tuesday.

The breaches occurred during May 2016. Ms Nathan and Ms James have been ordered to cease using the site as a dog rescue centre with immediate effect.

"Both defendants were sentenced to a two year conditional discharge (on each charge to run concurrently) and each ordered to pay costs of £10,000 plus a £10 surcharge.

“The defendants must now immediately cease the unauthorised use of the site and comply with both the Planning Enforcement Notice and Noise Abatement Notice. The council will be closely monitoring the situation to ensure that the defendants comply with the court order.

“The council, in order to fulfil its duties under both the planning and environmental health regimes, took enforcement action in the Magistrate’s Court in relation to unauthorised use of the site at Oldfield Lodge, Latchingdon, and statutory nuisance being caused through such use.”

Naturally, there's a huge hue and cry on social media, sobbing celebs pleading with everyone to help the poor wittle doggies (stuff the neighbours), and blaming the awful council for endangering them.


When sentencing, the district judge told the defendants: “You continued taking on dogs without the facility to do so and have been causing nuisance to your neighbours.

“You have got to stop and get to grips. Until you get planning permission you have to stop running a dog rescue.

“You need to close down the business so it doesn’t cause a nuisance or breach the Enforcement Notice. Otherwise the Local Authority will bring you back to court.”

Wait, a business? I thought this was run by selfless animal lovers, beggaring themselves to ensure poor Fido has a fome? 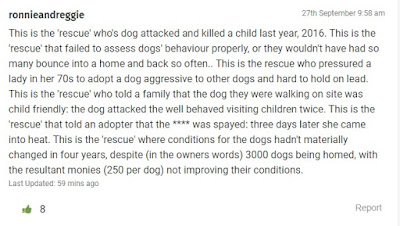 The reference to a dog they passed on having killed a child is this infamous case. 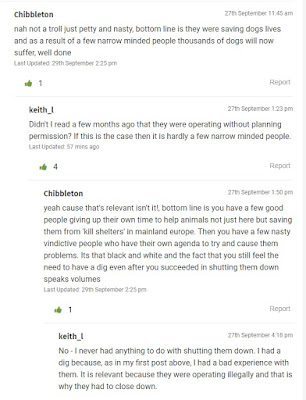 The comments are pretty illuminating about this 'rescue organisation', aren't they?
Posted by JuliaM at 10:30

Sarah Churchwell: "...I actually watched a horrifying video of a policeman breaking a young woman's fingers one by one.

I mean, there was really sadistic violence happening on the ground there..."

Over 12 hours before QT recorded; the woman who made that allegation had admitted it didn't happen and she made it up:

Well, it's fer the doggies like 'n all that, innit.

Yup! And that Churchill story proves how gullible we all are to #fakenews...

I suspect that's all that's going through their supporters' minds.