Ah, Essex 'Parenting' At Its Finest...

A parent has branded a council’s action as “diabolical” after workers removed a young boy’s tree house.

In his mother's garden?

Well, no. Not exactly. 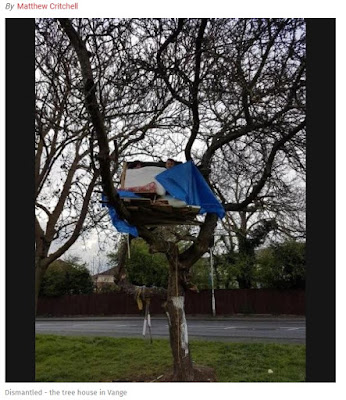 The angry parent said: “We were told it had to be removed for health and safety reasons.

“I told them that young people have nothing else to do as we have no parks or youth clubs about.” 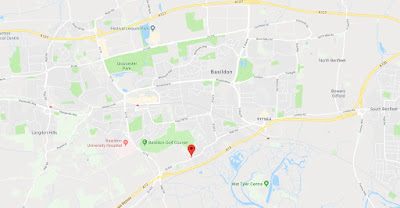 “When the council workers came down on Wednesday my step son sat in the tree house in protest.

“The council worker was even trying to get him down by telling him that his dad has McDonald’s food for him.”

And what were you doing? Taking selfies?


“They then came round to our house to speak with us about the health and safety dangers.

“It is an eyesore but it is not hurting anyone.

“I think what the council has done is diabolical.

“We were told that if my son fell from the tree we would be liable for it.”

Yes. Because you're an incompetent who shouldn't be in charge of a goldfish, never mind a child.
Posted by JuliaM at 10:30

Children should be encouraged to apply their creative skills but not out in public places. Is there not a scouts or youth cadets nearby?

Yet we are still informed the justice system unfairly and unequally treats women.

A lot of men have had abusive experiences in life and thus act badly and are alcholics, why no mitigation for that?

Reading about the drink driving,I think the judge called the right decision although it should be the same for men as well. Alcoholism is a bloody nightmare and needs great strength to conquer. In this case help is needed.

The comments though. Some of there are as clearly disconnected from reality as the mother appears to be. The one, from Agent Smith, I found especially amusing in how they've shoehorned in both 'nasty Tories austerity' and a 'NHS obesity crisis'. You have to credit them for some creative 'thinking' there;

" Is there not a scouts or youth cadets nearby?"

Yes, actually. But the little hellion's probably been expelled from them all.

"Yet we are still informed the justice system unfairly and unequally treats women."

I always look to see who's 'informing' us of that. And believe it accordingly.

"...how they've shoehorned in both 'nasty Tories austerity' and a 'NHS obesity crisis'. ..."