It's Over. Common Sense And Rationality Lost. 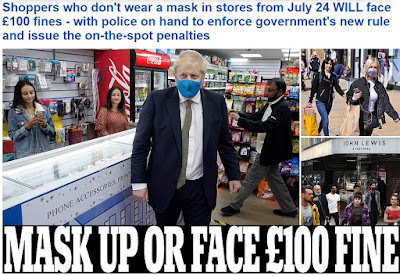 Face coverings have been compulsory on public transport since June 15 and, last Friday, Scotland ordered shoppers to wear them.

I've driven past buses where the passengers onboard are clearly wearing them....round their necks, having pulled them down to speak to companions as soon as they have got on. The same has been reported all over the Tube and rail network.


The move may anger those who find them uncomfortable or dislike the idea of state compulsion.


The move follows days of confusion about the Government’s stance on the issue.

On Sunday, Cabinet Office Minister Michael Gove said that while it was ‘basic good manners’ to wear masks in shops it would not be made compulsory.

He said it was ‘always better to trust to people’s common sense’.

Sadly, we don't have him as leader of the party. We apparently have a weak-willed, vacillating fool who listens to ... well, who? Not the scientists, clearly.

Or only when they say something he agrees with...


In March, deputy chief medical officer Jenny Harries said wearing a mask could ‘trap the virus’ and cause the person wearing it to breathe it in.

‘For the average member of the public walking down a street, it is not a good idea [to wear a face mask],’ she added.

But scientists have changed their view as evidence of the risk of asymptomatic and airborne transmission has grown. Officials now believe that face coverings can help stop people spreading the virus, particularly when they do not know they have it.


The move is part of a wider push to open up the economy and give consumers confidence to go out and spend.

By making it harder and more difficult for people to do so?
Posted by JuliaM at 09:00

Are we really in any more danger than we would be during the winter of an ordinary average year for flu? It is pretty much over, all we are left with is mass hysteria caused by the government, the media and sheeple who are incapable of thinking for themselves.

I understand that the Chinese Communist Party Spread Disease - known as CV19 for those who can't speak or read Mandarin - has agreed to stay out of shops until the 24th to give everyone a fair chance to buy (Chinese manufactured) masks. And people say that Xi Jinpingpong is a twat!
Penseivat

Given the size of the virus(one eigth the size of the influenza virus) and the well documented and uncontoversial evidence that masks are useless against flu, it’s like purely an exercise in control. I am currently debating whether to write PLACEBO or HOSTAGE on mine for the occasions it would be prudent to wear one ie to avoid the Karenpolice or appease authority.

It would appear the idiots in charge just want to kill off more of oldies since the wearing of masks does not stop the virus - they pass through any masks that are not pressure positive and on a canned air supply. It does make for good virtue signalling though.

The mask rule makes no difference, the police union spokesman was on TV this morning making every excuse under the sun why they won't be able to enforce this. Let's face it unless your a motorist you can get away with almost anything now anyway. I guess the poor over worked police will be too busy dragging senior citizens into court for not paying the TV tax to do anything else soon in any case.

If the Police are going to monitor the wearing of face masks in shops, it will be nice to see them out on our streets again.
(Also) Penseivat

"Are we really in any more danger than we would be during the winter of an ordinary average year for flu?"

The figures say 'not really', don't they?

"Well that's just made my life harder and millions of deaf people like me who rely on lip reading."

It's an utter joke. Just another case of government 'thinking': "We must do something. This is something. Let's do it."

"The mask rule makes no difference, the police union spokesman was on TV this morning making every excuse under the sun why they won't be able to enforce this."

One ineffectual arm of state fighting another? Where's my popcorn!?