Jessica Squires, 16, of Queen Elizabeth's Drive, New Addington, had travelled to watch a host of pop stars at the T4 On The Beach event at Weston-super-Mare in Somerset.


But her £35 journey to and from the event turned into a nightmare. Describing the return journey, Jessica told the Advertiser: "It was fine for the first 40 minutes, then the toilet exploded.

"It was a tsunami of urine and excrement going down the coach where we were all sitting – it was disgusting.

"There was poo down the middle of the aisle and it stank.

"We were saying to the driver 'please stop' so we could get off and he refused.

"Everyone was crying on the way back, there weren't any windows open."

Sounds like the day ended as it had begun to me. And a tsunami of the stuff?

This is a tsunami: 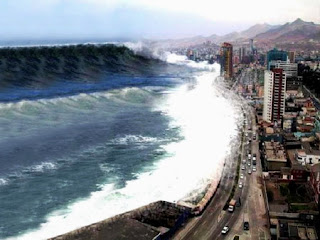 Just imagine the wave is yellow. And brown. And lumpy.

I don't think even in New Addington they are that full of it, are they?

The coach company has a rather different side of things. They basically say that she's full of s***:


A spokesman for National Express said: "The overwhelming majority of our services to T4 passed without incident and we are concerned about this disappointing experience.

"Regrettably, customers on one of the return services from T4 deliberately flooded the coach toilet and were also verbally abusive to the driver, which clearly impacted on the service.

"Customer experience is of paramount importance to National Express.

"We are in the process of investigating the other issues reported and will continue to work closely with Mrs Squires."

In the comments, doubt is expressed over the wording attributed to this sweet sixteen from New Addington, as well it might be, prompting a clarification:


“Thank you as always for your comments.

Just to clarify, the phrase 'a tsunami of....' was used by the teenager quoted, although 'urine' and 'excrement' were substituted in place of the actual two words used.

Email ThisBlogThis!Share to TwitterShare to FacebookShare to Pinterest
Labels: Croydon, storm in a teacup, underclass

Readers, I urge you to follow the link and enjoy the irony of all three photos depicting the artfully-groomed teenagers adopting suitable 'This-is-us-looking-upset-in-a-photogenic-way' expressions.

The 33-year-old cousin who accompanied them on their journey is, curiously enough absent from the pictures.

Perhaps someone should break it to them gently that talent scouts don't tend to recruit from the pages of 'This is Croydon', and in any case, their choice of publicity opportunity is unlikely to leave them smelling of roses...

When I saw the phrase 'Tsunami of Excrement' I thought for a moment that the story was talking about Ed Balls's performance in the Commons.

Surely there is video of Croydon's answer to High School Musical knee deep in ordure? That would be comedy gold.

In an interesting development I didn't see anyone being 'devastated' by the experience. Given that every Briton is now 'devastated' by every setback from having their family wiped out by a psycho axe murderer to dropping a 50p ice cream on the floor, this is surely a rarity.

I did think it was a great contender for 'Angry People In Local Newspapers'... ;)