Greg Dyke Would Have A Word For This Line Up...

Much wailing and gnashing of teeth in the 'Guardian' over the government decision to discontinue support to the Poppy Project. It's an outage, a scandal, it's going to result in huge number of trafficked women, etc, etc.

Of course, it's not that the government has realised what Tim Worstall's been patiently pointing out for ages. In fact, even the 'Guardian' has, in the past, accepted that their claims are at best hugely exaggerated.

And in a move seen as adding insult to injury:

The £4m contract for services that the charity developed went instead to the Salvation Army, a decision that the government said was "much better for victims of trafficking".

Hmmm, it may well just be a case that the government is following the rules of the progressives on 'diversity' as closely as they've always said they wanted?

Her all-female team of 16 support workers provides around-the-clock support and accommodation for those women who are trafficked to Britain and forced into prostitution or servitude.

Huh..?!? Is that a good gender mix? I mean, is it diverse and representative of the wider community? Does it even reflect the aims of the organisation itself?

The Poppy Project, which is committed to ending all prostitution on the grounds that it "helps to construct and maintain gender inequality"...

Guess not.
And for an organisation that claims to be concerned with foreign prostitution, it does look a hell of a lot like...
Well, see for yourself: 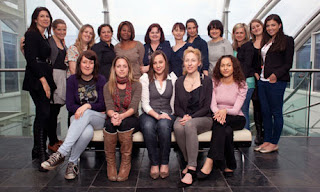 "But really it is about getting women to the stage where they have their freedom back," said Ivens, who this week will adopt another role – campaigning to raise the £1.8m a year required to help women like Maria and Mansa.

I think I'll keep making my donations to a rather different 'Poppy Project'.
Posted by JuliaM at 13:10

Tut, tut ... putting all those females in the photo out on the streets!

The English Collective of Prostitutes and the Police said the claims by this set of Poppy Pimps were a complete myth. Why did it take so long to stop the funding?

l still remember that prat MacShane on Newsnight being shown up for a complete idiot by the ECP.

Immigration controls would stop all this so-called human trafficking business wouldn't it. And a lot of other stuff as well.

Come on, they've got one black in the line up, probably to make the tea since the others went to Oxbridge so its not racist you know. People like that are not racist. No absolutely not.

For one nano-second, you had me worried there Julia ..

But, I ought to have known that the only "Poppy Project" either of us actually cares about .. turns out to be the same one .. ;)

I dunno about a word, but an anthology of prose sounds about right to me.

"Tut, tut ... putting all those females in the photo out on the streets!"

Some of them look like they could earn better money! And god knows, it's far more honest work...

"Immigration controls would stop all this so-called human trafficking business wouldn't it."

And then what would all these gals do for a living?!?

Not to mention, where would they find a cheap au-pair...

Oooh, they'll be squealing for even more taxpayer money now!

Don't know who this Greg is, but the photo appears to be full of enough dykes to be able to do without him.