Who Could Have Predicted This..?

People on Universal Credit are leaving Brighton and Hove City Council almost £400,000 short when it comes to paying their rent.

Eight per cent – or about one in 12 – council tenants are behind on their rent after receiving the new payment that combines housing benefit, child tax credit, jobseeker’s allowance, income support, working tax credit and employment support allowance.

These 948 people owe 38 per cent of all rent arrears, leaving the council with £368,000 in unpaid rent for the first nine months of the current financial year.

Naturally, everyone knows this is all the fault of the eeeeeevil Tory policy!


Councillor Tracey Hill, in charge of housing, said: “The Labour council takes very seriously the impact that Conservative Government welfare changes and austerity overall is having on the ability of many in the city to maintain their housing, including our council tenants.”

Green councillor David Gibson, spokesman for housing, said: “As more tenants are moved over to Universal Credit, arrears will get worse – and along with the misery of being in debt they will be forced to choose between food and rent.

“Then it is the council that has to pick up the pieces left by austerity.”

Except there might be a wee bit of a clue here in the comments: 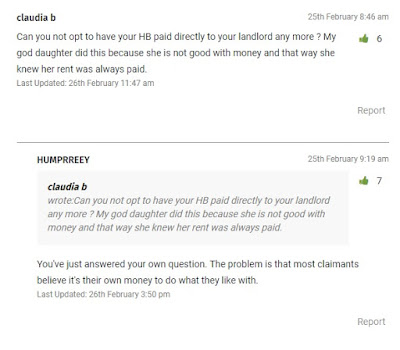 Yup. The Tory masterplan here seems to have been 'Hey, you rely on these useless spongers for votes? Fine. Have some consequences.'

And unlike other Tory masterplans, it's worked.

More popcorn, anyone?
Posted by JuliaM at 09:30