Remember the police union trying to tell us in the last post how 'stretched' the police were? 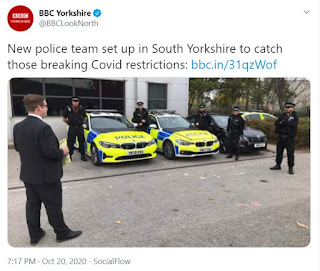 Yes, it's South Yorkshire Police taking aim at their own foot again again...

The officers will be sent out when there are reports of the rules being broken after the public requested "targeted action", South Yorkshire Police said.

Now you listen to the public..?

Assistant Ch Con David Hartley said: “We started by focusing our efforts on engagement and education to allow people time to become aware of and understand the rules."

You mean the ones that keep changing? And which are inadequately applied to all?

"However, we continue to receive reports of blatant and persistent rule-breaking which must be addressed."

Why don't you just file them where you filed the Rotherham reports instead?

It's nice to think that they might be inundated with complaints about "travellers" camps and mediaevalist "religious" gatherings. They're usually so keen to sidestep places where they'll meet any real opposition to their Common Purpose diktats

South Yorkshire plod has issued the following press statement to 'clarify' their position:- "The new Covid-19 response team will work alongside regular officers, meaning day to day policing will not be affected by the new demands."

That announcement will come as a relief to gangs of no particular description. You know, the ones belonging to a certain religious faction, who might have been made anxious by an implied intention to deal with law-breakers. Team boss, Sergeant Imran Ali Akhtar, pledged that because his team were inclined to follow political instructions for Covid rules, there would be no other policy changes and the force would continue to act in a moribund state with regard to the usual false accusations levelled at his grooming gang mates.

Well, 'theirs' some relief for your new county, Jaded.

Look, you are obviously the wrong shade, class, gender, politics, without mask or blue vinyl gloves and you are on your own.The jiffy bag you are holding probably contains a lethal weapon. You probably live in real house.
If you make any threatening move, like breathing, we will be forced to tazer you, many times. You will be charged with a multitude of crimes and social media as well as MSM will be told of your, as yet unproven, sexual deviancy.

How did I do Super?

Excellent. only one little criticism. Did you forewarn your colleagues to disable their body- cams?

Let me guess, 'targeted action' means that when there are reports that the local mosque is chocka with people, there won't be enough 'resources' to deal with that, nor if there's a pikey wedding or funeral, but if some working class white folk decide to have a party it'll be wall to wall cop cars outside and everyone arrested?

Yorkshire in lockdown. People unable to socialise, eat out with friends, visit each other.Stuck indoors all day staring out of the window watching the world go by.
Or as Melvin calls it-a normal day in his life.
They're they're old chap.
Jaded

It really beats cases of 'walking on the cracks in the pavement', and 'loitering at a pedestrian crossing'...

I, like most adults, prefer Sunday awakenings to sharp wit. This morning I feel surprisingly guiltless when the first guffaw arrived at the expense of a prisoner of their own immaturity.

Always a few whiteies you can depend on to pay the fines. As I keep saying here it's only those that are nomally law abiding that need to fear police action these days. If you want to be safe and get rich throw away your passport and take up a life of crime.

"It's nice to think that they might be inundated with complaints about "travellers" camps and mediaevalist "religious" gatherings."

So far, I've only seen them bothering one shisha bar in Birmingham. Meanwhile, Muslims marched on French embassies untroubled...

"It really beats cases of 'walking on the cracks in the pavement'..."

Heh! I miss them.

"...it's only those that are nomally law abiding that need to fear police action these days. If you want to be safe and get rich throw away your passport and take up a life of crime."

Sadly getting truer and truer.