I almost can't believe what I'm reading and seeing...

Police last night revealed extraordinary plans to patrol the Anglo-Welsh border to stop families from crossing over for a half-term holiday as Wales is plunged into a two-week 'firebreak' lockdown.

And despite the police union's protestations, you just know there are some in the forces that are going to enjoy this, don't you, Reader?

But the Police Federation of England and Wales has revealed that the ban is 'unenforceable', adding that policing which is 'already over-stretched due to the pandemic' would be complicated by the measure.

Really? Hadn't noticed them not responding to gatherings, unless they are of course those held by the protected groups...

Tesco and Lidl workers became Wales' first 'trolley police' as they were seen hiding shelves of 'non-essential' products behind plastic sheets to stop customers buying them ahead of the start of the restrictions, which came in earlier this evening.

Plastic barriers and stacks of drinks crates were also set up to block off certain aisles while other items were taped off by staff as part of efforts to follow the draconian new rules.

*stunned amazement* What's the point of this?

Mr Drakeford described stopping supermarkets from selling non-essential products during the firebreak lockdown as 'a straightforward matter of fairness'.

He said: 'We are requiring many hundreds of small businesses to close on the high street right across Wales.

'We cannot do that and then allow supermarkets to sell goods that those people are unable to sell.'

'And we are looking to minimise the amount of time that people spend out of their homes during this two-week period.

'This is not the time to be browsing around supermarkets looking for non-essential goods.' 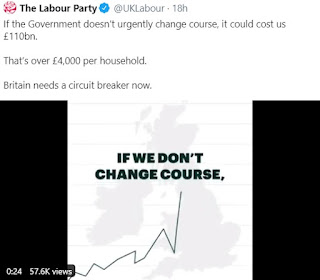 That is socialist thinking in a nutshell.

In any case, if the regular shops are being treated unfairly, stop treating them unfairly. Allow all the shops to open normally. There won't be any risk if everybody has their mask on.

It is not 'madness' is is evil: deliberate, strategic, planned evil.

Unless we 'get' that fact (and understand what evil really Is) - then we are all lost - eternally.

Women all over Wales are bracing themselves for men crazed at home, insisting on sex now they can't go out to shag sheep. On the other hand, some Welsh women are digging out old sheepskin coats ...

Sheep, of course, have yet to feel the full impact of the lockdown.

A lot of the Welsh are half-sheep anyway, which is why they vote Labour or Plaid.

If people knew just how many minor roads and country lanes go across the boarder they would know it's impossible to police it. Having said that as always the view from Westminster is probably different, after all there is nothing worth bothering about north of Watford anyway.

"What's the point of this?"

I have to wonder what the panic is all about. So far all there is is an up-tick in the number of false positive test results from a test that was never designed to do what they are asking of it and then they have the audacity to call those results 'cases' when they are nothing of the sort. A case is when someone has proven symptoms, and even those may not require hospitalisation. For some strange reason they want us to be good little sheep doing as our masters tell us, Maybe we should all rebel and dump the civil servants and politicians.

I just wish they'd get on with it, whatever the end game is. Universal income, digital currency, debt jubilee if you agree to this that and the other, 24/7 tracking, travel restrictions, rationing of food water health care and energy. Just ****** get on with it.

"There won't be any risk if everybody has their mask on"

Spend 38 minutes of your time and watch the following video: https://thehighwire.com/videos/mask-whistleblowers-tell-all/

Not only do "Masks" (in whatever form) provide no protection against a particle so small you need an electron microscope to see it, they actually increase the risk of catching infections, and negatively affect your body in other ways. The cynic in me suggests that is precisely what the government want - more people getting sick as winter approaches, so they can keep the "Second Wave" scaremongering going.

In light of that, you could almost believe the following was true:

"BREAKING NEWS: Seven dinghies packed with refugees arrived on a beach at Weston-Super-Mare this morning. Government sources said they are being returned to Wales immediately"

The Welsh wanted their own assembly and their own government.its not the problem of the rest of us if they now don't like what that government is doing. Suck it up Taffy it's what you voted for.

many minor roads and country lanes go across the boarder

Poor bugger, he must be feeling run over

"That is socialist thinking in a nutshell."

And yet people still vote for them...

"A lot of the Welsh are half-sheep anyway, which is why they vote Labour or Plaid."

Something has to explain it, it's this or something in the water...

"...they would know it's impossible to police it."

They don't seem to really care about that, though, do they?

"I have to wonder what the panic is all about. So far all there is is an up-tick in the number of false positive test results ..."

We're now told there's a national lockdown looming (maybe as early as this Monday) due to the projected huge numbers of deaths.

Does anyone know any undertakers? Are they unusually busy?

And why do you never see them on news reports wailing about how they can't cope?

"...they actually increase the risk of catching infections, and negatively affect your body in other ways. "

Agreed. So why are the government listening to 'experts' recommending them as a magic bullet?