Labour MPs - Making Labour Unelectable One Tweet At A Time... 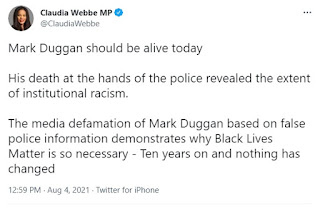 One wonders what, exactly, Ms Webbe thinks is the 'false police information' about known armed drug dealer Duggan?
Meanwhile, in the 'Guardian', perennial black criminal excuser Stafford Smith is at it again:

A number of Black men have died at the hands of the police in the borough of Haringey since Mark’s death. Many more have faced excessive police force. In 2015, Jermaine Baker was fatally shot outside Wood Green cown (sic) court.

Really? Just sitting innocently outside the court reading a newspaper, was he?

Jermaine Baker was part of a criminal gang trying to spring a prisoner from custody when he was killed by a Metropolitan police marksman in December 2015.

No. No he wasn't was he, Stafford? That bit slipped what passes for your mind, did it?

I daresay this cult of the Sacred Nigger will come crashing down when its one of the politicians or their families killed or raped or mugged or whatever. I wonder how long the rape apes in Rotherham or the g scum would have lasted if they picked on the rich and influential instead of the poor.

Read the thread. She's lost her mind. Then when people quite rightly point out the jury verdict and inquest she calls it racial bullying.
She's in court soon and I wonder if she's setting up a mental health defence. Exhibit A...all her tweets...
Jaded

"...if they picked on the rich and influential instead of the poor."

"She's in court soon and I wonder if she's setting up a mental health defence. Exhibit A...all her tweets..."