Orange Man Not So Bad Now..?

President Joe Biden angrily defended his handling of the U.S. withdrawal from Afghanistan, saying on Wednesday that chaos was unavoidable and snapping when asked about horrific images of Afghans falling from planes.

'That was four days ago, five days ago,' he said, even though the images of people falling to their deaths emerged on Monday.

Can you imagine what the reaction would have been if instead of Dementia Joe in the White House it had been Trump?
I wonder what the 'Guardian' coverage of this car crash interview looks like? 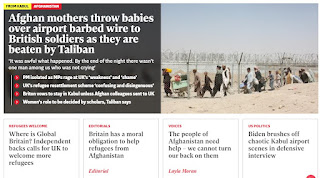 Well, I suppose at least it got a mention there...

The president also sought to scotch rumors that the US is planning to withdraw all troops aiding its rescue mission in just days, amid reports the UK is concerned about a sudden departure after being kept in the dark by its closest ally.

Biden said: 'If there's American citizens left, we're going to stay to get them all out.

'So Americans should understand that troops might have to be there beyond Aug. 31?' Stephanopoulos then asked.

'No,' Biden answered. 'Americans should understand that we're going to try to get it done before Aug. 31.'

But he then said, 'If we don't, we'll determine at the time who's left.'

So Dementia Joe can write to their grieving families, I presume. Good god, even the staunchest Trump hater must be having a teinge of conscience right now, surely?

Email ThisBlogThis!Share to TwitterShare to FacebookShare to Pinterest
Labels: beyond belief, Dementia Joe Biden, the fall of the West, USA

There is a forum over here (in Cyprus) that I am banned from...

They are all vociferously pro-EU, anti-Trump, anti-Boris, loathe Farage, everything is still Fatchers's fault, etc. You get the idea.

Amazingly, NOT ONE SINGLE MENTION of Afghanistan from any of them...

What a shocker! Lots of very fat, hungry pigeons coming home to roost now. I wonder how much longer he can cling on?