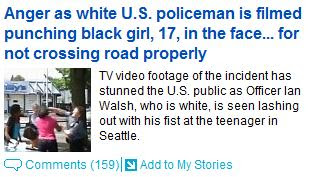 The bounder! The cad!

That's what you may be thinking.

But if you read the story, he was emphatically NOT 'punching her in the face for not crossing the road properly', but for assaulting him:

According to the police report a group of four girls were also spotted doing the same and the officer called them over to his patrol car.

The women became verbally abusive and started to walk away ignoring the Walsh’s instructions to remain where they stood.

When he tried to stop the teen two of them began grappling with him.

As the 17-year-old, wearing a pink top, tried to push away Walsh, he lashed out with his fist.

But her "assault" wouldnt have knocked the skin off a rice pudding, whereas his intemperate right hook was definitely not "proportionate". I expect better of all law enforcement officials, especially that US cop and the Met's Sgt Smellie.

His 'assault' on the girl wasn't up to much either. If a full grown man punches a 17 yr old girl in the face, I'd expect to see a heap on the ground, a bloody nose at least; nothing, except more abuse and attempts to resist restraint.

I;m surprised he didn't taser her. It seems a menacing mob formed and he was in genuine trouble.

Sgt Smellie has gone through a jury trial and now has come out the other end of an IPCC investigation. Read the transcripts, comments and any press reports you like but Sgt Smellie comes out completely exonerated. They wanted to get him but they couldn't. The IPCC remarks are especially good. I'm not sorry it didn't work out the way you wanted John R.

Read the blog of Wendy McElroy for some insight into the lovely antics of US coppers.

How amazing for two people thoroughly deserving of each other, to defy convention with such urgent intimacy.

"But her "assault" wouldnt have knocked the skin off a rice pudding, whereas his intemperate right hook was definitely not "proportionate"."

I'm surprised, like Chalcedon, that she wasn't tasered. I don't think I'd have been so reticent..

"...nothing, except more abuse and attempts to resist restraint."

Indeed. So much for the police assumption (seen in several of the 'police should be armed since Cumbria' discussions) that armed police make the public hesitant about approaching them!

"Read the blog of Wendy McElroy for some insight into the lovely antics of US coppers."

Yes, she does seem to have a bit of a bee in her bonnet.