Officers later called Mr Ledger while he was eating in a Chinese restaurant to arrange a meeting. The singer assumed it was a prank – but he was later arrested and is still under investigation.

‘They seemed pretty amazed but said the law is the law and it was their duty,’ he is reported to have said.

I was saying only yesterday that people are rapidly losing any faith they might have had in the police, wasn't I? And this is a sterling example of just why that situation is rapidly accelerating.
It's customary, on police blogs, for the rank & file to grumble and whine and complain that the job's not what it was, that the top brass are indifferent and out of touch and issuing increasingly strange orders to curry favour* with the politically correct elite.
And it anyone dares to complain, they are met with the usual response: 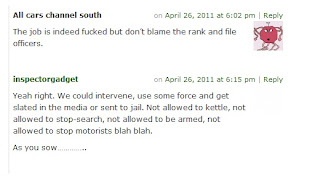 Now, since my response to those two posts has mysteriously not made it out of the moderation queue yet (although the blog owner's original misspelling of 'sew' has been corrected, something I also pointed out in a now-missing reply - tampering with evidence, Inspector? Tut tut!), I'll have to append it here.
It's always 'don't blame the rank and file officers', but this man wasn't arrested by the top brass, was he? He was arrested by those same rank and file officers who'll be along shortly to Gadget's or Ellie's to whine about it.
Officers who know what they are doing isn't what they signed up for, who are fully aware that this is going to rebound on them in the MSM, who'll blame the MSM for the resulting furore and sneer at the commenters under the 'Mail' article but who still go ahead and do it anyway, like the good little unthinking, box-ticking automatons that they are rapidly becoming...

A Hampshire police spokesman last night said a 32-year-old man of Chinese origin had claimed he was subjected to racial abuse.

He added: ‘If a victim believes that an alleged crime is racially aggravated, the police will treat it seriously. Investigations into this incident are continuing.’

Anyone with any shred of integrity left should be looking for a new job.
* Anyone offended by the use of the term 'curry favour' is cordially invited to take the sex and travel option...

Email ThisBlogThis!Share to TwitterShare to FacebookShare to Pinterest
Labels: cretins, police out of control, racism

Arrest the little shit for wasting police time and bringing his race into disrepute. Jesus, he must be so thin skinned as to be transfuckinglucent. :@
And the coppers are dim as hell and I speak as someone who's father was one and a good mate is one. Ffs.

Hint to the police: when someone sings
"Let's do the Time Warp Again" do not accept any complaints, particularly from:
* people in wheelchairs
* Goths
* Lost schoolteachers
* Bikers
* Members of the LGB and expecially the T community
* People conceived by IVF or other technological methods
* Space aliens

Quite a few times, where Gadget has written about the mountains of useless paperwork, meaning not directly relevant to the offence. "H&S checks, "Efnik monitoring shite" etc. I have written and asked "So what are YOU doing about it?"

Trouble is, it would take three or more people with an aim, and in agreement how that aim should be reached. An impossibility in Britain.

Basically, you don't like the paper work shite, "JUST SAY NO!!"

What would they do if EVERY copper in Britain sent the forms to admin, in form of a dog shit parcel with "Fuck off!" written on the address panel?

Sack them? Arrest them all using only chief inspectors and above?

But you get two people in a room in G.B,and you immediately have 15 different opinions.

The same applies for "stupid laws".

There are more than one way to skin a cat, and one of them is "JUST SAY NO!"

Spot-on with Gadget and his ilk.

That is utterly batshit insane!

So what would these plod do to someone singing God Save the Queen, including verse 6?

There is only one solution to this (other than piano wire in industrial quantities) and that is to game the system. If any incident is considered 'a racial incident' if the victim considers it so, then any time you have to report something to the police, claim it is a racial incident. No evidence, other than you saying it was so is required, and what are they going to do - ignore you, when they have such stringent rules to abide with?

Eventually the whole system would become irrelevant as most crimes would be reported as racially motivated. A sort of 'I'm Spartacus' for our times.

Gadget tampering with evidence? Whilst it cannot be denied, please permit me to say a few words in her defence, Julia.

Gadget fabricates evidence for the 'common good' to which she has committed herself. Undergoing masectomy in order to dupe her Mother Lodge, installation as a Master Mason demonstrated just how committed she is.

So next time I hear some ethnic type singing A Whiter Shade of Pale within earshot I'll report his racist arse...

The police are no longer fit for service. Everything they should be allowed to do has been denied them, and everything they shouldn't do is mandatory. A top-to-bottom house-cleaning is in order. For a start I'd sack anyone at the rank of Chief Super or above (effectively LtCol on up.) I would cast a very jaundiced eye on anyone who'd achieved Inspector rank without having done time as a basic Plod. Sergeants are the backbone of a police force (and an army), but they've been sidelined by this onslaught of PC, , graduate-entry, target-driven, cod-Marxist bullshit.

The chap arrested is a pub singer and was singing Kung Fu Fighting apparently when the guy objected as he was walking past, so it is reported. The cops of course are having to act on a complaint. but arresting the singer seems ridiculous when they could have had a discussion. There is far too much arresting going on when there is no evidence just some allegation.

@Jim: any time you have to report something to the police, claim it is a racial incident.

Are you sure that the racism laws apply if the "victim" is white anglo saxon protestant?

In light of this I think that a memo should be sent out to all landlords to screen there jukebox for any hits that could cause offence. White Wedding by Billy Idol, Back in Black by ACDC, Pink by aerosmith, White Rabbit by Jefersons Airplane and anything by Rick Astley

their, not there (sorry)

I went off Gadget after he defended the copper who beat Ian Tomlinson who very very soon afterwards died (careful phrasing there). If the dead man had been a non-white would Gadget have defended PC Harwood?

That's a prime example of why I stopped visiting Gadget & co. The utter hypocrisy of pretending to be on "our" side until one of "us" dares to make a criticism, then we are instantly cut off...

Having just been to Richard North's gaff and read the latest on the Bristol riots, my opinion of Old Bill is now somewhere below ground level.

Oh and I meant to say in reply to Furor Teutonicus - Of course they're not going to "JUST SAY NO!!". That might put a comfortable retirement and nice pension at risk.....

..highest standards of professional service from police
officers and police staff. For any member of the Hampshire Constabulary to act in a manner that falls short of this standard, it is likely to seriously affect the trust and confidence of the police service with the public, especially people from Black and Minority Ethnic backgrounds.
4.5.3. All officers are reminded that any breach of legislation
and/or any lack of professionalism in dealing with a person to which this policy relates, would make
themselves liable to disciplinary action, and could seriously undermine the evidence obtained in any criminal proceedings taken against any person.
4.5.4. Failure to carry out this policy and to comply with the
law could make Hampshire Constabulary and individual
employees financially liable under one or more of the following pieces of legislation: Equality Act 2010; and the Human Rights Act 1998 (HRA) – Article 2 (the right
to life) and Article 8 (the right to privacy).

Only the Govt can sort this shit out.

If you think the Gov have even the faintest desire to 'sort this shit out', you are merely proving why you were selected to be Babylon in the first place.

Don't try to back-track now, it's too late.

You're part of 'this shit'.

"Jesus, he must be so thin skinned as to be transfuckinglucent."

"There are more than one way to skin a cat, and one of them is "JUST SAY NO!""

I think the quiet haemorrhage of decent officers from the UK for sunnier climes says it all....

"There is only one solution to this (other than piano wire in industrial quantities) and that is to game the system. If any incident is considered 'a racial incident' if the victim considers it so, then any time you have to report something to the police, claim it is a racial incident. No evidence, other than you saying it was so is required..."

"The chap arrested is a pub singer and was singing Kung Fu Fighting apparently when the guy objected as he was walking past, so it is reported."

The standard response over at Gadget's has already been wheeled out: 'No, the MSM is biased and one sided, I bet it was a real racial incident, the cops wouldn't have done this otherwise, they're all out to get us, waaaaaa...!'

"Having just been to Richard North's gaff and read the latest on the Bristol riots, my opinion of Old Bill is now somewhere below ground level."

On this, I'm with the police! I'm not sure what it'd take for me not to be, when the other side are proven lawbreakers or thieves (squatters)...

"Only the Govt can sort this shit out."

Unfortunately, while everyone's looking to 'the government' to sort things out, no-one's doing anything themselves. Other than whinge about how they are portrayed.

Oh and I meant to say in reply to Furor Teutonicus - Of course they're not going to "JUST SAY NO!!". That might put a comfortable retirement and nice pension at risk..... XX

You have purposefully "missed the point", which is if EVERY one did it, what are they going to do? Sack every police officer in the U.K? Then stand around doing a Spike Milligan Q8 "What are we going to do now?" chant?

To reverse an old saying "If you are not against it, you are FOR it!"

The primcipal of "If you do not stand up and be counted as the opposition, you are equally as guilty as the instigator." was established at Nürnberg.

English Viking,
I don't think the current Govt have any intention of sorting it out, for fear of being called racist.
I have been retired 5 years and although things were getting worse in my last couple of years, they were nothing like they are now. For one thing there would have been no power to arrest the musician.
I feel sorry for the Police who joined in the 1990's before the job had been ruined. They have been paying into their pensions for 20 years and cannot afford to walk away.
- although Australia, New Zealand and Canada are proving popular

Maybe you should check your spelling. 'Sew' means to attach by stitching. 'Sow' means to plant or scatter seed. What you do before you can reap, in fact, as Mr. Gadget said. Maybe an apology would be in order?